How would you tag the presence of a dedicated meat counter, fish counter or deli within a supermarket?
I refer to supermarkets in which there is a dedicated person cutting the meat for you, not simply places where you can buy meat.
I was searching specifically for a supermarket with a meat counter the other day and realized this information was missing in the map; I’d like to add it for the shops in my area but I’m a bit uncertain in how to go about it.
Do you know how this is currently tagged?

I don’t think there’s a dedicated tag about this. I know that some people use a dedicated node inside the supermarket area to highlight this kind of counters, but I find it wrong (since it’s not a separated shop, it’s a service). Maybe a sells:* tag could help (even if they are not very used).

there should be a dedicated tag, sells: could be added for the kind of counter.
What kind are there?
meat (poultry, …)
fish
cold cuts
cheese
bread
pastry/cakes

any other?
If we use the scheme for department shops as well, there are possibly coffee bars, cafes, and deli.

I’m not a fan of the “sells:*” tags because they don’t match with the way we usually document things and I couldn’t find a list of proposed tags in this scheme.

There is Key:vending - OpenStreetMap Wiki which is mostly used for vending machines. The wiki has a list of many goods and the concept could be used outwit the context of vending machines, too.

OpenLevelUp/Use cases/Shopping mall - OpenStreetMap Wiki suggests vending + department=store_section but the key department is used in other contexts, too.

I’m in favor of vending in combination with some other tag. Maybe vending + shop_section=counter. This way shop_section values could be used to map other shop parts like checkouts, too. We also should not limit this to foods - there’s also big DIY stores, vast tree nurseries and department stores selling clothes, food, garden stuff, …

There are 13 examples of ice_cream_counter=yes which is the closest precedent I could find. I haven’t checked the context of these elements.

Whatever tag we use, I think it is important to limit the use to cases where the supermarket itself is selling the products. I wouldn’t like to have the counter of a butcher or bakery inside the supermarket building be hidden in a vending tag.

certainly not thought to represent a complete shop inventory, it is rather to tag the useful to know oddity where you can buy something you might not have expected or been sure about.

This is definitely a solution; however it wouldn’t allow specifying what I wish to specify.
I’m not interested in tagging if a shop sells meat or not, since at least around here all of them (or at least the vast majority) do sell meat in some form.
What I wish to specify is whether they have a dedicated meat counter, which is interesting if you wish to get some specific kind of meat/fish/cold cut that is not generally found packaged.
Just as a putative example: I was searching for tripe for the world tripe day but since here eating tripe is not very common I had to go in several different supermarkets and butcher before finding it; thus I was interested in knowing whether the supermarket I was going to actually had a dedicated counter or if I could simply skip it altogether.

This looks like a nice tag for such things; I guess it could go with meat_counter=yes, fish_counter=yes and deli_counter=yes.
I’m not a native English speaker thus I’m not sure that deli counter is something that could easily be interpreted.

This could definitely be a solution, but I have no intention to micromap all those shops; ideally I just want a tag applied to the shop=supermarket saying: you can have a person serving you meat here.
As I understand it, this department=store_section, store_section=counter would require that I tag each counter separately from the store. This would be particularly problematic for me since most of the stores around here are simply mapped as a node.

Deli counter is the normal English term so I would suggest that as an appropriate term.

I am not sure this is the best approach, because it will lead to confusion with other counters (e.g. traffic_counter), and because if you only propose and document a property, people will likely use this for features as well (happened with other tags).
I’d rather prefer a systematic approach where counter is the feature and an additional tag says what it sells. I’d maybe also distinguish cold cuts from deli, but less sure on this.

Alright, thus you would propose something such as counter=yes, counter=meat;fish;deli?
These applied to the supermarket object?

The everyday person is far more likely to be interested in whether a supermarket sells fresh meat or fish by weight, than in the presence of a device to count traffic volume (particularly as only 3 are mapped). As these are the standard way to describe such facilities in supermarkets, using a key close to such usage is only sensible. I find the argument a ‘strawman’ one.

English, and other languages, often have words which have multiple meanings, and context is usually adequate to know which one is meant. @Minh_Nguyen has done a great job in documenting (some?) of the issues with homonymous keys, but I don’t think these suggestions fall into that class.

Incidentally, a traffic counter is really in the class of monitoring stations.

I’d rather prefer a systematic approach where counter is the feature and an additional tag says what it sells. I’d maybe also distinguish cold cuts from deli, but less sure on this.

As a native English speaker I have never heard the term cold cuts, I assume it is an American term for the deli-counter?

A deli-counter is where loose cold cooked meat, cheese and other cooked items such as sausage rolls and pork pies are sold.

I would prefer mapping the supermarket as an area and having the counters at their estimated positions, mapped on their own, something like shop:part=counter, product=meat / fish / bread / cheese / deli / etc.

A deli-counter is where loose cold cooked meat, cheese and other cooked items such as sausage rolls and pork pies are sold.

When there is a greater selection, those would typically be differentiated. cold cuts may not be the correct term, thank you for bringing it up, what I would want is both, a generic tag for a counter where “something of everything” is sold (as you can find in convenience stores and small supermarkets) but also a specific way to tag cheese (and maybe other dairy products), “specialties” (according to local customs, maybe should be more specific which kind of specialty), meat based sliced food (ham, salami, etc.), salads, pies, fish, sweat bakery, other bakery and whatever is locally needed and can be amended. 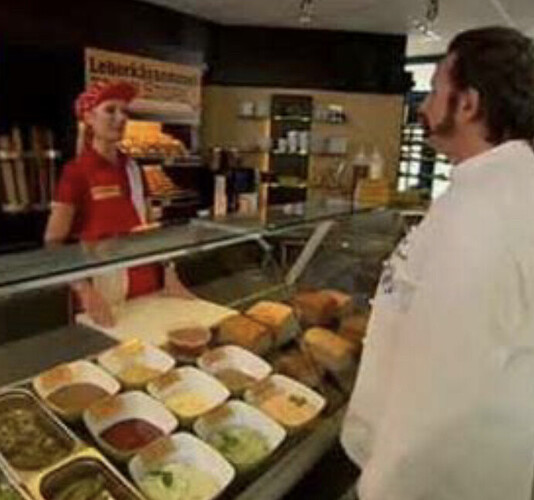 The supermarkets and hypermarkets I’ve micromapped have been large enough that it makes sense to tag each department or counter as an ordinary POI. The concept of a full-service supermarket originally developed from bringing independent shops under one roof. The largest grocery chain in the U.S. still posts the strapline “Food & Drug” outside most of its locations, to distinguish these supermarkets from the adjacent but separate grocery stores and pharmacies it operated until the 1970s.