It appears to be possible for one person to click “off-topic” on someone else’s posting and that posting is then hidden from anyone else, until the moderators intervene.

This seems like an exceptionally low bar, and it looks like the facility is already being abused.

Can this be adjusted so that postings are only hidden if several people click “off-topic”, in line with how sane forums do it?

The behavior depends on the trust level of each user: 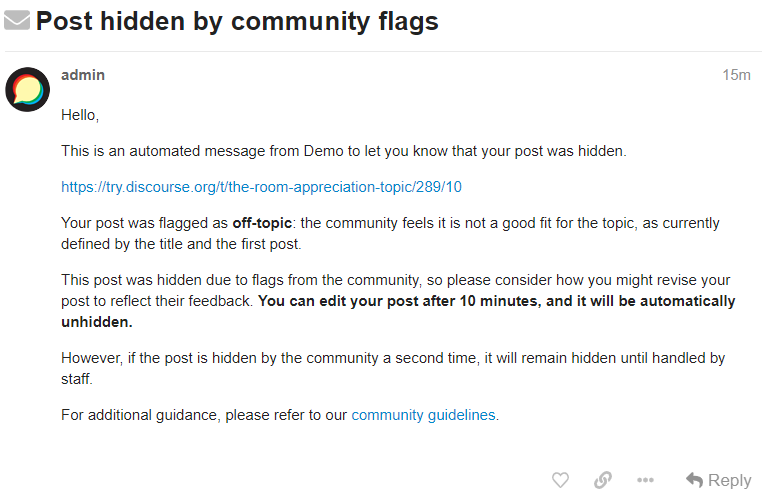 What happens when you flag something? 📣 Site admins are given significant flexibility via Site Settings to adjust how flags work. This topics assumes that all site settings are set to their default. Many of the automatic options presented here, like...

If someone is abusing this feature to report false flags, please report it to @forums-governance since it’s a direct violation of the guidelines.

That’s really not a great design. In practically every other forum I’ve known, hiding a comment can only be done by the forum administrators. Giving people this ability simply because they spend a lot of time on the forum (which usually equates to a higher trust level) will encourage cliquey, insular behaviour.

Discourse community moderation is one of its best features in my opinion. People earn trust level by using the forum and engaging with others and respecting the guidelines.

Abuses can always happen, but they are easily identified and stoppable. A person who false report many times get penalized in their next reports automatically.

Could have been me then. I suggested via the report button to move a topic to “Help and Support”. But if I remember correctly, I clicked the bottom option which lets you describe a custom reason. (I.e. “should this be moved to X?”)

Should the report button not used for things like that?

It wasn’t you. If on a flag you select “Something else” this allows you to add a comment and doesn’t hide the post.

An off topic flag will check the hiding threshold and hide it if reached.

I’m pretty sure the de-facto meaning of “off-topic” is unrelated with the OP or the category, not the forum in general.

I’m pretty sure the de-facto meaning of “off-topic” is unrelated with the OP or the category, not the forum in general.

Yes, especially as the description when reporting a post says “not relevant to the discussion”. I think most users would read that as the specific discussion currently in progress, not the entire forum.

Also there is no indication to the user that reporting a post in this way could result in it immediately being hidden.

A similar discussion has been held here earlier:

The discourse forum software seems to be based around a concept, I’d describe as: Users invest time and efforts to build a public personality. I conclude that, from the number of awards users here receive. This reminds me of marketing strategies, commonly used to make users stay with the platform. Recently, in a topic I started, a new user, with not much public record, flagged several posts as “inappropriate: the community feels it is offensive, abusive, or a violation of our community guidelin…

Thank you for the reminder. I still think, in a civilised community, members should be given the means to argue their actions. So if I flag something off-topic, I want to be prompted to state a reason, that could be displayed instead of the flagged post. This system here just sends a canned statement, quite a blunt one, too, to the poster and the community. This made me shy from flagging, because I rather not appear as such a bastard.

I was told, that this system works like that, in order to protect whistle-blowers. So perhaps, flaggers should be given the choice, to remain anonymous, or to state their anger? Second choice might even give moderators the last bit of info to gauge the issue. Yet, I was also told, this is just how discourse works, and the OWG cannot do much about it.

I think it is ok that flaggers remain anonymous to the users, but the threshold for offtopic has to be raised significantly in order to hide a contribution. One single person should not be sufficient, something like 3 seems more reasonable to confirm it is probably offtopic or at least contentious.
In general removing the post completely is not appropriate for what is “only” offtopic and not insulting, personal attack, or somehow else offending the rules. For the latter it seems ok to hide them while offtopic could be folded and let the user decide whether they want to expand it nonetheless.

I think this was me, I wanted a few posts moved to another topic.

This was unclear to me, I interpret off topic as something that doesn’t pertain to that particular topic.
Could there be a specific option to advise moving the post to a different topic and maybe optionally specifying which topic it should be moved to?

Then this flag should not be called “off-topic” but something else instead. There are lots of topics here, that is what the “t” in the URI stands for? But there is only one forum. Perhaps “off-community”?

In addition to avoiding an misunderstandable formulation, i consider hiding a contribution by a simple click by any user as not desirable.
It seems to me as a relatively heavy action and I would leave that - after notifying - for mods, especially since this action is prone to misuse.
A “notify as …” instead of “off-topic” should suffice.

Given the experience in the heavlily used german forum this happens not too often to be a problem for mods.

These are the settings we can tweak

In Discourse 2.3 we unified our Review Queue. There’s now one convenient place to go to review all types of content (Flags, Queued Posts, Users, Akismet, etc.) During this update, we took the opportunity to upgrade how flags are prioritised and dealt...

I agree. Also because all of my posts that have been hidden have later been restored by a moderator, which demonstrates that hiding them before was likely the wrong action to take.

I just had a look and the german explanation for the “off-topic” action is exactly like your interpretation.

“This post is not relevant to the current discussion in the sense of the title and the first post and should probably be moved.”

If you really trust your users, for example, you could set the hide post sensitivity to High . If you want to let questionable content stick around a bit longer, set it to Low .

Probably things like spam posts or posts that clearly are “bad” would not be hidden as quickly, too. But as I interpret that info page, the moderators will still get a notice, even if the offending post is not hidden yet. And if it’s a really bad post, many users will flag it, which should lead to it being hidden soon enough.