I’m not sure how many other countries and areas this touches, but here in the alpine regions, we do have something, that I’dlike to call a “light forest”. The official Topomap also uses a special area pattern for this here in Switzerland. If you visit their site (map.geo.admin.ch) you can see the areas with a mix of small and bigger green dots. Those are the light forests.

Down in the lower regions around densely populated areas, forests tend to be very sharply bordered. There’s either a clear forest with densely standing trees or there is grass/meadow etc, nothing in between.

But this is not the case for mountaineous areas or more remote valleys. There you will find something that is neither forest, not grass, not meadow, nor bushland. It’s a light forest … areas with lots of trees, but not yet as dense as a real forest, but too many to map them individually. This avoids the issue of having really weird polygons in the mountains, where people sometimes consider it a forest and someetimes not.

I therefore would like to suggest and discuss a new tag to accomodate for these regions of “light forest”.

discuss a new tag to accomodate for these regions of “light forest”.

while I understand the issue, I am not sure you can solve it with a new tag, because it will still have no distinct border and you will still have the issue that there is a point where some mappers will consider it a forest and others a meadow with trees.

We have leaf_type=needleleaved, broadleaved, mixed, and probably other values that aren’t in my area, and that seems to work okay. So if OP is describing a type of natural=wood / landuse=forest, it seems perfectly reasonable to have a tag that further describes the type of forest.

The borders are indeed somewhat difficult, but in many ways it is quite applicable around here. The type tag I mostly regards as a theoretical tag. Most people do not know what trees there are and couch mapping won’t tell, either, which is why I don’t see that tag used very much. Also, that is purely used to describe the type of trees in the forest, and not used for density to my knowledge.The sparsely distributed trees of a “Light” forest however are quite clearly seen on fly over fotography etc. The official Topomaps also see the need to make this difference, which is useful for hiking etc, where those landmarks are important.

I would be very happy with a new tag. I often miss this opportunity. The difference to the real forest is great. In Swiss agriculture, we even know of a special area type for this common type of use in the Jura. It’s called “Waldweide, forest pasture”. These areas are often not forest at all, but used for agriculture. Tagging as a forest is technically wrong

Is the suggestion for a top-level tag to replace natural=wood and/or landuse=forest, or for an additional tag to be used in conjunction with these (e.g. wood=light_forest or forest=light_forest, or something else like forest_density=)?

This reminds me a little bit of a proposal a few years ago (that did not proceed) for tagging “dehesa” areas I’m not saying that Swiss light forest is the same thing as Iberian “dehesa”, but some of the issues raised are probably similar - it might be worth looking at the tagging discussions:
https://wiki.openstreetmap.org/w/index.php?title=Proposed_features/Dehesa&oldid=1896517
https://lists.openstreetmap.org/pipermail/tagging/2019-August/047801.html
https://lists.openstreetmap.org/pipermail/tagging/2019-September/047853.html

Some of these forest/pastures areas are mapped with individual trees that represent quite an amount of work: OpenStreetMap
Nice, but barely sustainable.
It’s a good idea to create a top-level tag for these, although the current tagging as meadow makes sense given their use as pastures.

I believe most of these light forested areas are not forest (used by humans for wood production) but natural=wood. I do not see any reason why there should not be a specific tag for these areas, although I would prefer a sub-level tag for it, like natural=wood + wood=low_density.

Tagging the trees in such areas as separate object is not only a lot of work but also requires a lot of maintenance as every severy storm may knock down a couple of these trees. This would make sense only of there are very few trees scattered over a pasture/meadow imho.

In the already-mentioned “dehesa” discussion, the term “agroforestry” came up. Would that happen to be applicable to Switzerland’s “light forest” areas? Maybe agroforestry could be the concept to be encoded in a new (top-level) tag, as it seems specific enough and general enough at the same time:

Other than the term “light forest” it makes the agricultural use explicit. (Which might be good or bad, depending on what we need.)

There are several issues here:

My basic suggestions would be:

I would additionally suggest finding a way to tag the following:

Ecotones are potentially mappable, but that’s another topic.

Lastly, a picture of the scattered trees on the Feldberg where snow, wind etc. stops most from establishing themselves. Yes, it was wet. 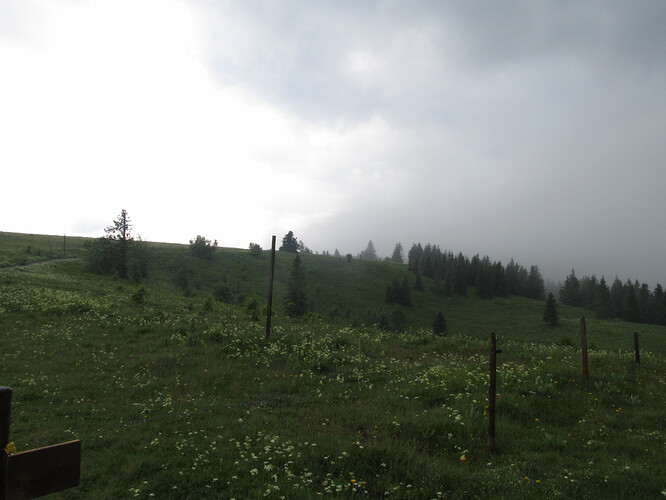 I’m sure I’ve forgotten a few other points, from earlier studies I have made in this area.

The French IGN also has a different symbolisation, described as “Foret ouverte”, see this area in the Serre Chevalier ski domaine. The whole upper Val Guisane is a bit of an oddity in France as it contains about 90% of all native Larch woods.

This photo roughly shows the same area from the lift junction: 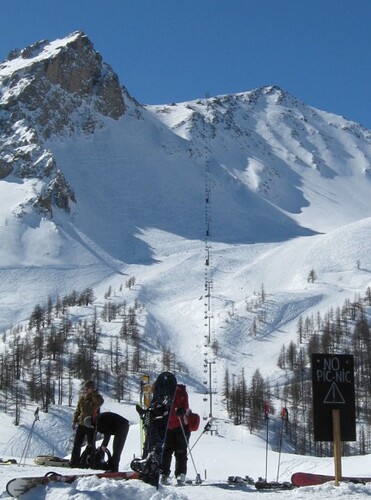 Since quite a few now also mention agro use within forests: that’s an interesting added value. But the original thing I meant is a very widespread light forest type, that we have in mountains, that are quite often not used by anyone. While I enjoy more uses mentioned in the forest department, I hope this does not sink under water

There is wood:density=, and was an idea of canopy_density=. The latter more obviously differentiates between number of trees and crown coverage, which can be further specified as cover or closure, being affected by height and other factors. The former needs to be compared with basal area.

I do see a need for discrimination between classical wood with closed canopy, open wood and grassland with scattered trees not only in mountain areas but also in the subtropics (tree savannah) and in human mangaged areas like wood pasture.

I’m very reluctant for introducing new first level tags, I rather prefer adding information by second level tags. First level tag should come from predominant classification, here natural=wood or landuse=forest, second level tag can be something like scattered_trees=yes or wood:type=tree_savannah. It may even be useful to have a natural=grassland together with e.g. scattered_trees=yes when there is less then a quarter tree coverage but more than a few trees.

There is of course a considerable ambiguity between scattered trees and closed canopy, but that is unavoidable when trying to bring the real world into a classifying scheme and is more or less common to all tagging.

Generally, unspecific adjectives like “light” or “soft” or (as suggested recently) “demanding” don’t make for good tags. Everyone has their own definition and it tends to just encourage endless rounds of iterative wikifiddling.

If you can find a reasonably common noun that defines what you mean, that would help.

I have been wondering if “light forest” might be causing confusion through translation.

Agreed, as mentioned before, and I also like the idea of “scattered_trees=yes” for this issue.

natural=wood / natural=grassland / natural=scrub as well as landuse=meadow could all go together with scattered_trees=yes to come as close as possible to the real OTG situation. A simple and pragmatical solution imho.

There is of course a considerable ambiguity between scattered trees and closed canopy, but that is unavoidable when trying to bring the real world into a classifying scheme and is more or less common to all tagging.

I agree with the fact people interpret such adjectives themselves or won’t use them at all, since it confuses them more than it helps. Difficult to do by just words. You could in theory specify this with a density of “X to Y trees per square meter”, but nobody will use this, really.

The “light forest” is something that clearly has forest character. It’s not a meadow with a few trees, there are still too many to map them individually. That’s the best guide I could come up with, if we want to stay simple.

I’d rather go with examples/images as an aid in addition. Especially in the mountains, this will all be couchmapped by aerial fotos, since a lot of the areas are not even accessible. That’s why I think examples of aerial imagery are somewhat important as well as ground photos.

FWIW there is a documented tag for meadow orchards specifically: 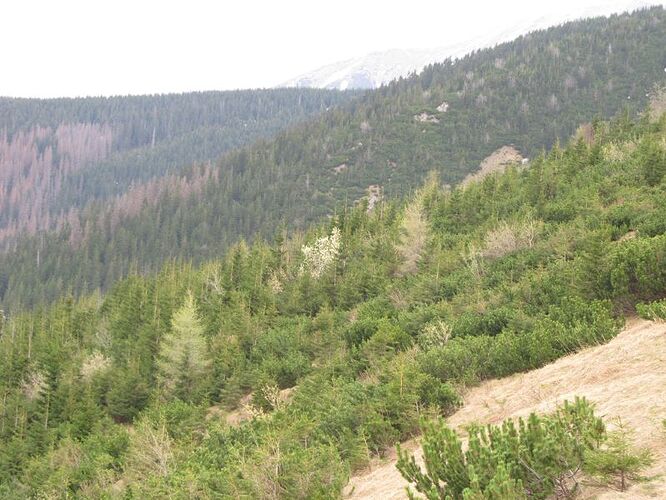 Here a nice example in the High Tatra near Zakopane, roughly here. Pinus mugo scrub with scattered Willows, Larch and Spruce. I would think the trees survive until there is a large avalanche, which may happen every few years (a similar situation exists on the N slopes of the Feldberg)