The “light forest” is something that clearly has forest character.

There are various definitions for wood, the FAO (UN) says tree crowns must cover at least 10% of the area and size must be at least 5000 square meters, which seems a reasonable lower end for both properties

Yes, and there is also landuse=meadow & meadow=meadow_orchard depending on the predominant use.

In this case a differentiation is even more difficult because predominant use can only be achieved by OTG knowledge.

I suspect this diagram from Ellenberg Vegetation Mitteleuropa mit den Alpen (6th edition, p. 684) may clarify. I assume you are referring to what the diagram calls “lichter Wald”. 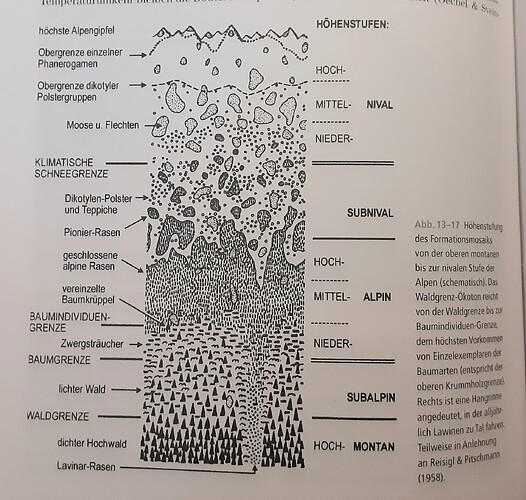 Note that, somewhat to my surprise both Baumgrenze and Waldgrenze are given as standard terms in my English Dictionary of Ecology, which also use Krummholz and Kampfzone for the area between these two lines. 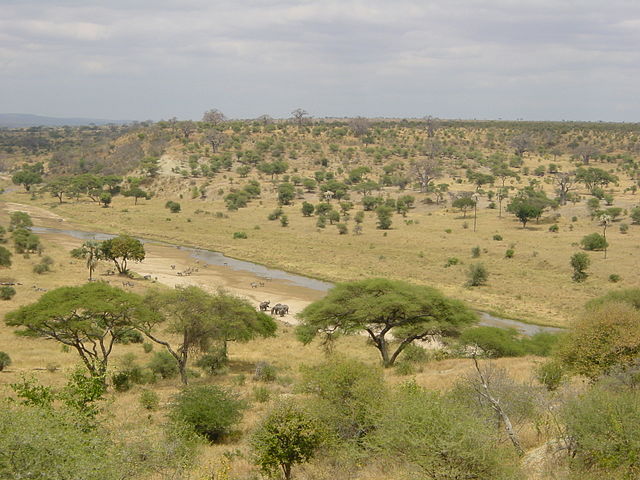 I’m inclined to try to introduce a new top-level tag (knowing it would be a hard sell to the community). See the above image of an African tree savanna – those areas are vast and should get a dedicated rendering. And apart from dehesas and alpine forests, I believe similar landscapes exist in other parts of the world. The tagging problem is currently worked around by not mapping almost any land cover in Africa.

These can be tagged with natural=grassland + grassland=savanna according to the wiki. New top level tags are always somewhat of a horror for data consumers. (And conversely, if software support for a tag is miniscule, there is little chance that it is widely adopted.)

If, as wikipedia asserts, savanna covers 20% of the world’s land surface it surely deserves a separate natural tag. However, the other options discussed, of having tags for canopy cover/closure and tree density, would apply equally well to this as a distinct natural tag, or if it was desired to map it as a subclass of natural=grassland or natural=wood. (sorry 'cos I was searching using a terminal “h” I didn’t see the grassland tag)

Most of our terminology for natural features, and particularly vegetation, is inherently boreo-temperate. Tagging is not even particularly good for types of vegetation encountered around the Mediterranean.

It may well be worth creating a separate thread for discussing savanna.

A useful picture. It’s a bit more difficult to decide for the borders of these areas on an airfoto, but that’s something we would have to live with. It is still better, than when it’s not existing, though. But I see the implementation seems to be quite variable in ideas.

An example image of flyover photography in Switzerland: 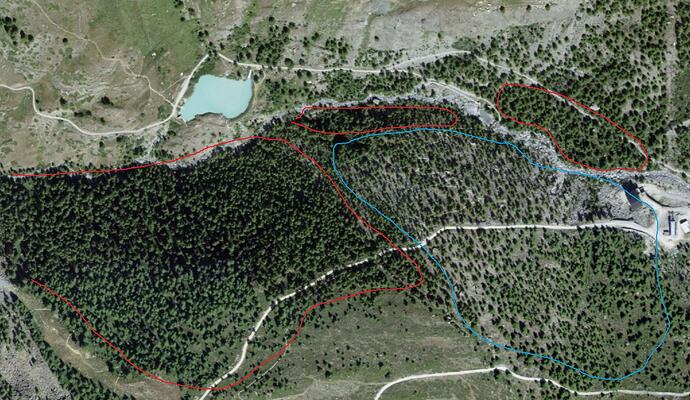 1365×793 237 KB
The Red line surrounds dense(r), normal forest (I was a bit sluggish … the “south” has a bit of light forest included). The blue line surrounds a light(er) forest. Way to many trees to mark individually, but very clearly spaced much more with an alpinegrassland substrate they stand on. This spearation can be done fairly clearly … which I find such a tag or subtag (and also distinct rendering/border in ID editor etc) very useful.
3 Likes
← previous page