just to inform you that DWG is replacing a military area with leisure park.

Sadly, this is a poor attempt to restore the work of the “ukranian team” mappers that are mistagging/deleting many military features in ukranian controlled areas. This questionable activity includes even objects mapped prior to the russian invasion.

In an attempt to help maintain a false and misleading version of OSM content, DWG evidently took the side of ukranian government; such kind of changesets can be dangerous, so I suggest DWG to avoid at least automatic reverts. 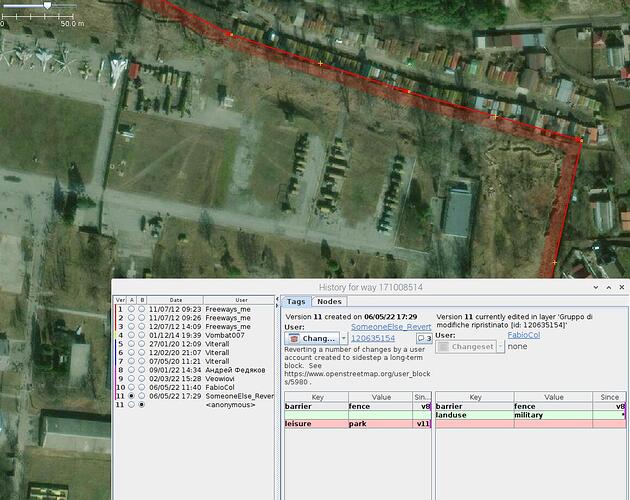 For context, this user was previously blocked until they could come to terms with how the local community wanted to map things. They then created a new account to enforce their point of view using JOSM’s reverter plugin. Since this isn’t an acceptable way to behave I reverted to the status quo ante (as would be usual in a situation like this).

What I wrote previously here still applies. I would suggest that the “new” saigon2k1 account (that appears to have been created and renamed to avoid being associated with previous block history) read that again and try and appreciate the nuance of the situation.

can local communities agree on any kind of tagging, despite global tagging conventions? E.g. in a country inhabited mostly by radical cyclists, could the community agree to use highway=cycleway for all arterial highways, so that routing engines would only provide useful pedestrian and bicycle routing?

When I called for a guideline/license provision that military and intelligence use of our data should not be “allowed” the replies were all saying we are open data and must be open for every use.
https://lists.openstreetmap.org/pipermail/talk/2010-February/047787.html

A good point! I would support your call for a guideline concerning military/intelligence use without exception. Not to expect that those bodies would restrain from making use of our data but just for the statement. 100% pro!

Nevertheless I understand it is a difference if you look at a country in the hand of radical cyclists (or the like) or at a country being subject to a military conflict, unwanted special military operation or open war, however you want to call it.

Generally I believe it is a matter of respect and politeness to consider the ideas and wishes of the local communities in any country as long as these do not conflict with international tagging conventions. In the extreme situation of an ongoing war also these tagging conventions become temporarily insignificant in my opinion which means everyone not being part of the national community should simply refrain from any mapping work there.

E.g. in a country inhabited mostly by radical cyclists…

This is a serious situation, and deserves serious consideration, not a flippant reply about “radical cyclists”. Where’s that downvote button when we need it?

I know it is not very popular because the military complex is well funded and some people are having multimillion contracts for facilitating access to OpenStreetMap data, but if we are going to do politics and not just mapping, it would be a statement for a better world to condemn military (ab)use of our data.

I am not supportive of any aggression against people or countries, but I also don’t believe vandalizing the current data will make any difference in this war, particularly removing military areas, any military in the world who is preparing for war with another country surely will first and foremost collect all details about the opponents military facilities and locations of troups and equipment (apart from the mere facility locations in peace times none of this can be found in OpenStreetMap anyway), and the Ukrainian army is of course steadily relocating their equipment according to continuous intelligence information about upcoming attacks, and other considerations.

For the sake of peace, despite it seeming completely useless and without effect, I am willing to accept that the Ukrainian community in a situation of war, can decide to make such helpless attempts by vandalizing their own data. Provided we can be reasonably sure that this is indeed the will of the vast majority of the locals, and not just of some vocal and very active minority.

Creating additional accounts to circumvent blocks violates the OSMFs terms of service for openstreetmap.org (besides the behaviour being asocial and otherwise not acceptable). IMHO this doesn’t need any further discussion and the user and any associated accounts should be permanently banned and measures taken to prevent any further signups.

here if someone missed an appeal from Ukrainian OSM Community

On behalf of the OSM Ukraine in connection with Russia’s ongoing military invasion of Ukraine we are appealing to people who are contributing to the development and improvement of the OSM data. We urge everyone to refrain from any mapping of the territory of Ukraine at the moment! https://wiki.openstreetmap.org/wiki/Russian-Ukrainian_war [do-not-edit]