On behalf of the OSM Ukraine in connection with Russia’s ongoing military invasion of Ukraine we are appealing to people who are contributing to the development and improvement of the OSM data.

We urge everyone to refrain from any mapping of the territory of Ukraine at the moment! 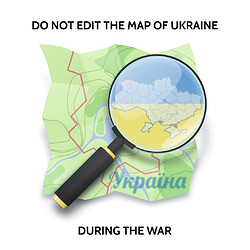 Totally support andygol’s position. As an active mapper in the Ukrainian community, I think frankly it’s not the best time to map any object in Ukraine. Our country is struggling, our cities are destroyed by russian occupants, state on the ground is changing in hours not even in days. Thanks to all community members who support Ukraine and Ukrainians.

Hopefully, we can combine our community power and map Ukraine soon, after our victory!

What? Should we write English?

Which DeepL translated to…

We are all for open data and for the development of OSM, including in Ukraine.
But in times of war, there is too great a temptation to use this data for military tasks and targets for attack.

The only edits I recently made in Ukraine was to add “french” names, so that OSM maps can be used by press and media.

I presume this is not causing any harm on the ground.

It’s a right decision. In war time mapping of any military, industrial objects or points of humanitarian aids is too dangerous even lethal for soldiers and civilians around this objects.

I have suspended mapping in Ukraine. I am not 100 percent sure that my decision was correct. I don’t know if OpenStreetMap data was used to harm our military or civilian infrastructure or not.

But I am convinced that the enemy should not be underestimated. Open-source intelligence is available to any mid-level IT professional. The OpenStreetMap database is so open and accessible that using it as part of an advanced OSINT system can play a significant or even a major role in its effectiveness. Cyber-attacks are only part of what Russian cyber-espionage groups do.

Regardless, I believe OpenStreetMap has helped many Ukrainians and will help many more.

I apologize for any translation inaccuracies.

This should apply equally to Ukrainian mappers. Changing certain mapped military infrastructure after the start of Russian aggression is not only pointless but counterproductive:

On the one hand:

On the other hand:

normal civilians mostly use mobile devices and the current data status - and can no longer tell if they are close to military objects and thus potential targets of attack.

Note that usefulness of this is reduced by multiple factors