These kind or movable bridges are very common in the Netherlands: 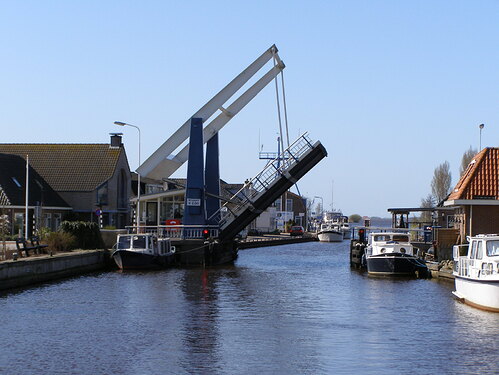 In Dutch the difference between a “basculebrug” (bascule bridge) and an “ophaalbrug” (drawbridge) is that for the former the bridge is rotated at the pivot point, usually with a contraweight below the road, while for the latter the free end of the bridge is lifted.

So the bridge in the picture is an “ophaalbrug”. The Wikipedia article Double-beam drawbridge indicates these bridge are called drawbridge in English too.

However when I look to Openstreetmap Wiki, I find conflicting definitions where this bridge could be seen as bridge:movable=bascule and bridge:movable=drawbridge.

Key:bridge:movable says that a drawbridge is similar to a bascule bridge but it is raised by chains attached at the free end. In modern bridges steel beams are used instead of chains, but I’d say the principle how it moves is the same.

Tag:bridge:movable=bascule shows this similar bridge in Montceau-les-Mines as an example, which is called a bascule bridge.

Tag:bridge:movable=drawbridge talks about bridges typically associated with the entrance of a castle surrounded by a moat. So it seems to exclude the common modern version. However the pictured bridge moves with the same principle as a modern double-beam drawbridge.

How would the bridge in the picture be called in English? And is the difference between bascule bridges and drawbridges in English the same as in the OSM-definition?