Is there an implicite oneway rule for bicycles on sidewalks?

As a data consumer, I would probably avoid inferring a default for sidewalks based on any default about bike lanes. For one thing, pedestrian traffic is usually much less regulated than bicycle traffic. A pedestrian shouldn’t have to circle the block or make a U-turn at a more distant intersection in order to reach a shop on the other side of the street. To the extent that bicycles are allowed on the sidewalk, I’d intuitively expect them to follow similar rules about the direction of travel.

Moreover, in many regions, sidewalks represent separate infrastructure (and can thus be mapped as a separate way) more frequently than bike lanes. As far as I know, there’s no inherent safety reason why a physically separated sidewalk would need to follow the same direction of traffic as a bike lane. (Pedestrians walking on shoulders are a different story, but the one-way laws for them are very localized.)

That said, I wouldn’t entirely rule out the possibility of a one-way sidewalk. Some places probably did have such rules to enforce social distancing during the early days of the pandemic. But you could also imagine, say, an amusement park having such rules as a form of crowd management.

One edge case where I would expect bicycles to be required to go in a specific direction is at roundabouts. At least in the U.S., a popular design for roundabouts forces cyclists to leave the bike lane and travel on the sidewalk when going around the roundabout. I’ve never seen a sign enforcing a particular direction for bikes on these sidewalk segments, but it would be pretty pointless to go backwards. 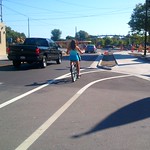 Bike lane at the new traffic circle where Pacific Ave curves around to the wharf directs cyclists onto the sidewalk. Most cyclists I saw, including this girl here, stayed in the regular traffic lane. Sent from my Googaw

I am only referring to the bicycle traffic - for pedestrians we always assume “oneway” no.
In particular, it is about sidewalks, which, like cycleways, are next to the road. These are often not mapped as a separate line. Regardless of this, however, there may also be a small separation but it is tagged at the carrigeway and not separate. If cycling is allowed there, here in Germany, in the direction of travel, the right path must always be used unless there are explicit signs to the contrary.

Therefore I see no difference for the one-way regulation of cycleways and sidewalks.

Separate Infrastructure should be mapped as separate ways and then default is oneway=no.

In particular, it is about sidewalks, which, like cycleways, are next to the road.

Ah, I should’ve qualified my remarks by noting that the notion of a sidewalk differs regionally. My comments are specific to a North American context where a sidewalk may be laid out right next to the road but still separated by a curb. This is distinct from a pedestrian lane, which is separated only by a painted line, but mappers tend to map pedestrian lanes as sidewalk tags on the roadway. (To illustrate the divide, consider my complaint about what’s being described as controversial when classifying sidewalks.)

Since regional differences may cause the OSM definition of a sidewalk to differ from a legal definition, and since the law may not be clear everywhere about the one-way rules for cyclists anyways, I think mappers and data consumers should avoid relying on the notion of implicit defaults, which are opportunities for misunderstanding.

And speaking of Santa Cruz in this context, I believe the Boardwalk (a private amusement park, though open to non-ticket holding pedestrians who do not wish to ride the amusement rides) does “attempt” to keep pedestrians moving in one direction or another along certain segments of pedestrian pathways, although it doesn’t always work. There is, for example, an “exit only” (one way turnstile) at the “rail bridge” side of the “park,” preventing “north to south” pedestrian entry, while allowing “south to north” pedestrian egress. Such “attempts” to control pedestrian flow in the area don’t seem to work well.

Similarly, there are “bicycles only in this direction” (again attempts, but somewhat more successfully) along the Boardwalk’s access routes (the “Coastal Trail” along Beach Street). These are not sidewalks, they are designated-for-cyclists cycleway. Pedestrians are allowed on parallel sidewalk, but because the area which parallels this bike path is right on the edge, and just outside the Boardwalk (property) formally, there is no attempt (by the city of Santa Cruz) to regulate the direction of pedestrians on the sidewalk around here (or anywhere else in Santa Cruz, as far as I know).

To be clear, I agree with Minh here: nothing is “implicit” about bicycles on sidewalks, nor should it be. Whether bicycles are allowed on sidewalks, regardless of direction (in harmony with pedestrians or otherwise) is very much dependent on local ordinances, which vary from jurisdiction to jurisdiction.

Very simple in France: sidewalk => no access for bicycles. KISS

I believe the Boardwalk (a private amusement park, though open to non-ticket holding pedestrians who do not wish to ride the amusement rides) does “attempt” to keep pedestrians moving in one direction or another along certain segments of pedestrian pathways,

A similar example would be escalators and belt driven “people movers” that move pedestrians in one way. They are usually found in buildings so often only a issue when micro mapping. They make it difficult but nit impossible to walk in the other direction.

To summarize:
For sidewalks the default is oneway=no.
Oneway rules for cyclists must be explicitly recorded: e.g.
sidewalk:right:oneway=yes
sidewalk:left:oneway=-1

Should be “reverse”, right?

Sorry - you are right - value reverse does not exist.