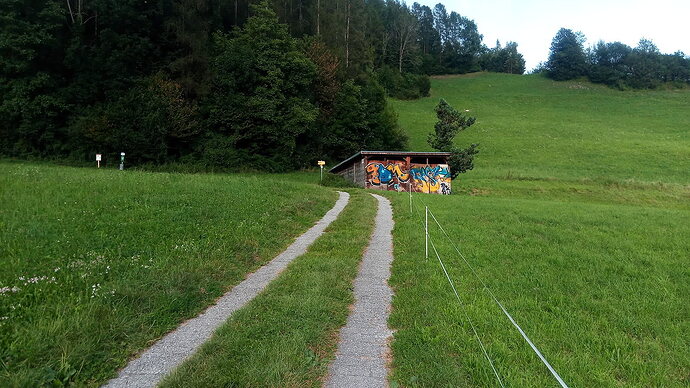 These are not so rare here. There is Tag:surface=concrete:lanes - OpenStreetMap Wiki - but there is not https://wiki.openstreetmap.org/wiki/Tag:surface=asphalt:lanes - I once set that and all QA tools did scold me.

What do you advise?

What warning did the qa tools give?

I suggest using surface:middle=grass. It can be combined with any surface tag and while it is also still undocumented, it has been used a decent amount of time (more than surface=asphalt:lanes).

Conceptually, I like that it can answer the question what is in between the “lanes”. For example, you sometimes find lanes separated by grass pavers as well.

The tagging triggers this osmose level 3 (minor) warning - https://github.com/osm-fr/osmose-backend/blob/master/plugins/TagFix_BadValue.py - I guess this is due to the colon.

I would have read the colon as starting a suffix, not as part of the value itself, in a sense that: Yes, there is asphalt; No, it does not cover the whole track, but only “lanes” thereof.

There are a mere 265 uses surface=asphalt:lanes | Tags | OpenStreetMap Taginfo - mostly on tracks, all but two in Europe, lots with a tracktype set, as can be learned from the overpass query.

Curiously, according to overpass turbo most mappers consider such tracktype=grade1, even though much of the track, seen as a whole, is “soft material”.

Surface:middle makes me feel at home a bit more, overpass turbo results look closer to my, however subjective, expectations of tracktype

I take it, that its combined with surface=asphalt, without :lanes suffix.

PS: Now there are two more, one with asphalt, one with pebblestone.

But are you sure it means grass between asphalt in the lane, rather than grass in the middle of the roadway between 2 asphalt lanes? surface=asphalt:lanes would show this more clearly.
In general, surface:centre= might be more appropriate, as there are ~7k handrail:center=. It is suitable elsewhere, eg lit:centre= (70) and parking:lane:center=. Another point in the meaning is centreline is known to be between 2 directions, while middle can be in the middle of anything cf placement=middle_of:*.
Anyway =*:lanes and =*:plates are not ideal. From this question, they can’t show what’s filling the gap.

But are you sure it means grass between asphalt in the lane, rather than grass in the middle of the roadway between 2 asphalt lanes?

I’ve followed several discussions of the tag over the years, and I’m probably responsible for part of the tag’s popularity because I supported it quite early in OSM2World. And it has consistently been considered to refer to the surface “between the wheels”. So yes, I’m pretty confident that this is the intended meaning.

I once set that and all QA tools did scold me.

What do you advise?

If QA tools complain about valid tagging, then the proper fix is to report problem to authors of QA tools.

Middle seems quite appropriate. Centre (mind the British spelling) to me only less so. Though not a native here, just heard of a Scottish pop band Middle of the Road. I also took some samples of tag usage, in Austria, Germany and Italy. The mapping community is very consistent in its use. Surface:middle is in the centre of the surface of the object, that the mapping represents.

@Mateusz_Konieczny The accepted solution looks indeed superior to me. This spares me bugging Frogdrigo with more exceptions.

OTOH, I feel now obliged to create the missing documentation

The situation is out of 1880, the tracks are there to support the 3 guns of the battery. It was the only pavement, baked bricks, available. The grass in the middle was logical and cheaper. Just to answer the suggestion for concrete.