Routing/directions not recognising pathway - am I missing something?

New to OpenStreetMap editing, I’ve added an informal pathway that runs across a field and made sure that it has all access fields set to ‘yes’ and surface set to ‘unpaved’ as I read that if these fields are missing then it can be penalised by routing engines (source).

This is the link to the directions, it should run along that dotted pathway but instead it’s snapping to the main pathway at the top.

I’ve tried GraphHopper, OSRM and Valhalla and they all do the same thing. 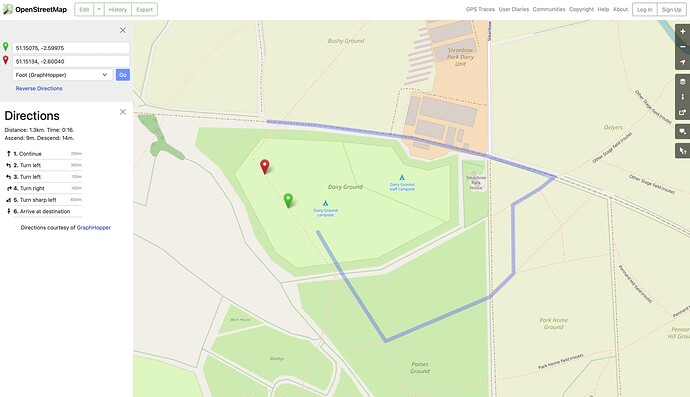 Could anyone point me in the direction of where I might be going wrong? Should it not be an informal path?

EDIT: FWIW, I’ve looked at nearby paths that do work with routing engines and they’ve been set to informal path. I’ve copied the same fields hoping it would behave the same way but it doesn’t appear to.

It might take a while (days?) for routers to recognize new data/data changes.

Hi @ToniE, I had assumed that because the new path was visible on the map displayed by the routing engine that the directions would also be up to date, is this not the case?

no, osm.org is simply a map.

The routing engines shown there are separate installations with their own databases.
Their database gets updated from time to time reading and converting OSM data.

Online routers take a snapshot every day or so and then take a day or so to process so routing is not done immediately.

With OSMand updates I can see your path, and it does route.

However is it a right of way today? I assume it only exists when the festival is taking place.

Access=yes on a path is a bit odd as it routes cars here.

Hi @trigpoint, I’m not familiar with OSMand but I took a look at their web map and it doesn’t seem to show the route. Is the data more up-to-date when you download their app?

Regarding the metadata, I think you’re right in that the pathways are really only relevant during the festival, which key is more appropriate? temporary, seasonal or intermittent? As for the access key, would you suggest setting it to ‘no’ and then adding a ‘foot=yes’ attribute?

OSMand app has an option to update hourly.

Generally in OSM we do not map temporary features such as this, if we did it would have been mapped years ago .

Also I imagine the festival map has some sort of copyright?

They’re technically not temporary, as the grounds are accessible to the public when the festival is not running, so I guess the key should be marked as not being temporary, but the campsites should be. The satellite view shows the pathways so the use of the festival map isn’t needed. There were some pathways that just stopped in the middle of a field, which doesn’t reflect what the path is actually like in reality so it seems like the mapping of this area is partially incomplete, I was hoping to tidy it up a bit.

Really?, it is a working dairy farm. Normally the only access would be on any PROWs.

They’re happy for anyone to walk the grounds so as long as they comply with the countryside code.

Have you any evidence for that statement?

News articles and forum posts of users reporting what the on-site office has told them. I can also contact them to get it in writing in the form of an email if it’s needed for submissions on OSM.

Do you have a link to that page? The only thing I’ve found on Facebook is this page which isn’t by the official Glastonbury Festival Facebook page, it’s by an unofficial page called ‘Glasto Fest Feed’, it looks like it could be linked to the Worthy Farm Facebook page but there’s no indication that this is an official page either. I will contact the festival to get clarification.

The about statement basically says what is expected for a working farm, in other words stick to the PROW.

Ah yes that’s the page I came across, it’s not clear that it’s actually run by the farm itself and it looks as though it was taken from the statement their made on the official website when the first COVID lockdowns began asking people not to visit the site. I’ve emailed the festival now so we can get up-to-date information.