They are all over the place, informal paths. OSM-Carto renders them indistinguishable from maintained hiking paths and distinguishable from paved footways only, when somebody tells you, what to look at. They clutter the woods/recreation areas/&c. Routers always use the, because that saves 5m walk. How about a separate highway=desire key to tag those desire lines?

Foot=yes should be default, unless foot=no reflects legal standing. Every other access defaults to no. Surface=ground also default. What more?

There’s also the question of what constitutes a “desire path”. To take a park near me (Riverside State Park) as an example, there are five distinct networks of trails:

Which of these should be tagged as highway=desire? Keep in mind that, for the casual hiker, it’s generally not possible to distinguish groups 1, 3, and 5. (Groups 2 and 4 stand out because they’re much wider than the others).

They are all over the place, informal paths. OSM-Carto renders them indistinguishable from maintained hiking paths and distinguishable from paved footways only, when somebody tells you, what to look at. They clutter the woods/recreation areas/&c. Routers always use the, because that saves 5m walk.

people also love to use them when it saves some meters walking. And many people love mapping them. Basically their existence can be seen as evidence for improvable urban planning of the footway network

Routers always use the, because that saves 5m walk.

What is a problem with that?

z13 cemeteries especially were red blobs before that change, after that change rural/remote areas are poorly served by footway rendering 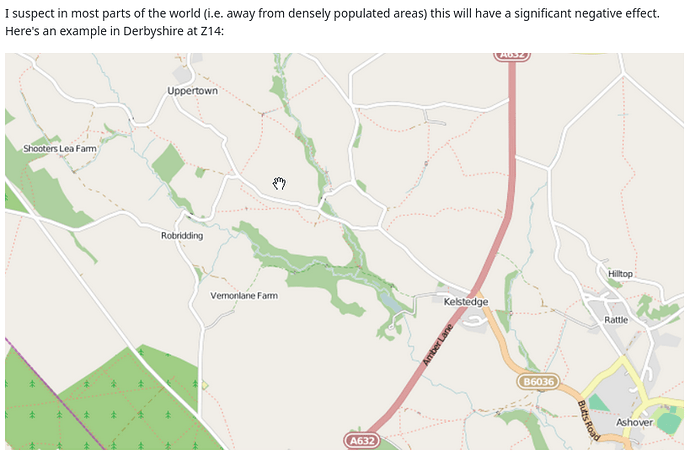 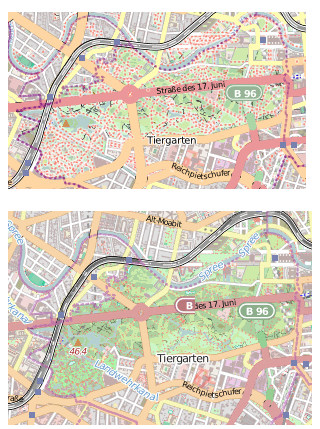 How about a separate highway=desire key to tag those desire lines?

has all problems of highway=scramble without benefits or justification going for it (I was dubious about highway=scramble - here I see no reason at all to have special primary tag to denote path origin/official classification).

@Mateusz_Konieczny while we’re at it, can you point me to the discussion where / when path and footway became the same rendering, that is RED dashes for the smallest possible highways?

(nowadays I am even less sure whether it was a good idea, but highway=path was definitely a bad idea in the first place as it includes everything from unpaved trails, desire paths and mixed paved cycleway-footways and supposedly also things that are not paths at all like winter-only snowmobile trails)

Any idea on the origins of the red color for footways?

Any idea on the origins of the red color for footways?

I don’t think this would work, desire line paths vary so much, and occur in all sorts of locations. Two examples suffice from local university campuses:

So both these paths are official, but originated as desire lines (true of many main roads too). There was a university in the US which didn’t lay any paths on campus when it opened, but then paved the most used desire lines.

Also it is not uncommon that informal paths are not desire lines, but some sort of random wriggles through the woods. I spent the better part of a morning walking all the paths in the wood here. SomeoneElse’s map shows the official rights of way in red, so all the others are informal paths, mainly used by dog walkers (and also shows how tagging can be used to separate them). They vary in width from about 50 cm to 1.5 metres, something I never went back to capture. One of the official paths is a ride (man_made=cut_line) and therefore quite wide.

I think both desire=yes and informal=yes can be useful on paths, but other tags like width, trailblazed etc. may help as well. Where landowners have some control access=discouraged can be used if the short-cuts are causing erosion (I know the National Trust have been doing this in England and Wales, but can’t find a current example).

I’ve taken photos of both informal and desire line paths which emerged during Covid times near home. I should collate them.

I considered those synonyms. The useful map is true to its name. The site on OSM is just a maze. I wonder though, how the different renderings get chosen. Looking at the tags, the distinction is based on rights of way. That may have or not have something to do with physical properties?

In OSM cartography, the pedestrian sphere has little means to differentiate what is different on location, where situation is much less such a maze as on the map, where they are all alike. I’d like to see the map mirror more closely what is on the ground. Not just for roads. 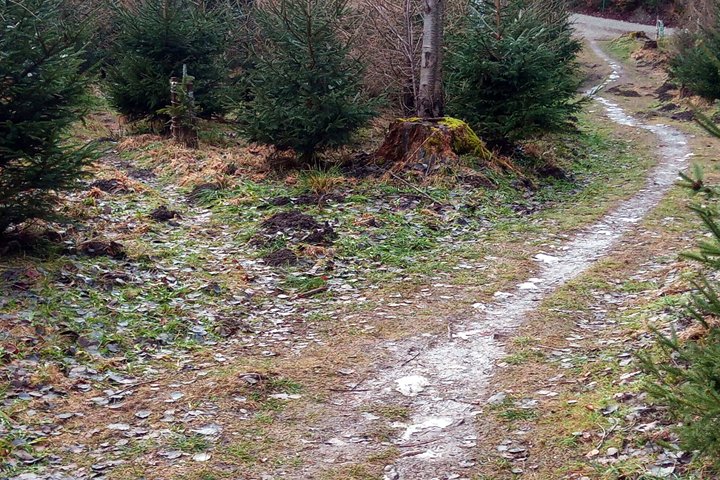 Informal seems a good starting point. That is the only difference between the path on the left and the one on the right. (Width is not an option: How to measure?)

For my personal notes, I have been using a five-level categorization for paths/trails/whatever. So far, these categories have stayed in my notebooks and not gone into OSM. While this system works well where I live (Sweden) it may not be applicable in, say, Kenya.

2 and 4 are for intermediate cases.

So in this system, the right path looks like a 3 (maybe 2.5-ish…) while the left one is a 4 or 5 (though it’s hard to say with certainty from just the picture).

The obvious problem with this is that it is very much dependent on the judgement of the mapper.

From left to right:

trail_visibility = good vs. excellent ; not much of a difference
surface = ground vs. ground ; even less a difference

I like the idea to specify width in number of people that can walk there side by side. If I’d take width of the paths including “verge” (or chose surface=grass) that would make two or three on the right, the path on the left still only one.

I considered those synonyms

Not quite. A desire line or desire path is a specific type of informal path created without any intention at all. There are also paths that are not specifically desire lines but still qualify as informal paths because they aren’t formally established in any way. It’s a very subtle difference, but they aren’t exact synonyms.

Having read the Wikipedia article, I dare say, the left hand path in the photo above is a true desire line. But I do not think I still get what else informal could mean? Even on the desire line, the intention is clear: to get from A to B; which is not the intention to create a path. WP suggests, it is about distance - shortcuts are mentioned. Are desire lines always straight, never winding, except for obstacles?

I’d suggest that If I (and lots of other people) cut a corner to get from one place to another - that’s a desire line. If I’m a scally and hop over a fence to nick apples from a tree on private land, I wouldn’t call that a desire line, but it is informal.

If any intentional work such as digging, cutting of trees, etc was done to create the path originally then it’s not a desire line. A desire line comes into being entirely organically through people (or animals) walking in the same spot and wearing a tread into the ground. An example of an informal path that is not a desire line would be a path that was intentionally constructed a long time ago but then neglected for a long time. A faint remnant still exists today but no formal maintenance is done and there is no signage. However, it’s not a fully abandoned path because it is still used by some people. Essentially it’s very similar to a desire path but it isn’t actually one since it was originally intentionally built. In practice it may be hard to even tell the difference unless one knows the history of the path very well.

Yes, like I said, it works well around where I live (and probably in most of Sweden, and countries with similar patterns of soil types, vegetation, and usage) but not necessarily anywhere else. Which is why it has, until now, never gone outside my private notes.