For Poland there is public/state forest database available as online map with several layers. One of the layer show the type of dominant trees in given area of the forest: Bank Danych o Lasach.

This is very useful for me because knowing pine likes dry conditions I can look after pine areas and in advance target such places as perfect spots for camping (more about it I wrote at Żerowisko – Przypadkopis in Polish).

Now I wonder whether there are such databases and maps for other European countries? I.e. maps which allow me to take a look and say “ok, this area of the forest in majority is pine”.

In Vorarlberg, we have corresponding data that also shows the main tree species. Just one example: 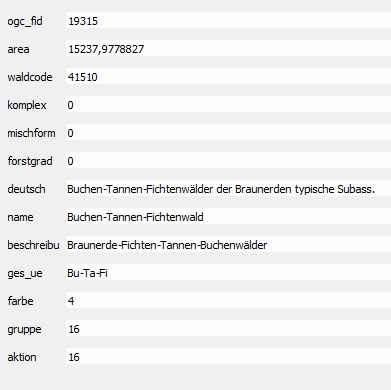 The same data seems to exist for Tyrol.

I can’t find the data for the whole country of Austria, but I think there is. You may find it if you search the numerous records.

Most European countries will have data of this sort either at a national or regional level. A couple of examples which I’ve blogged about:

I’d be interested in looking at the PL data for Zakopane as I failed to get good enough photos to establish were given species of trees are dominant. The forests here are very interesting because of patches of different trees in the same slope, and the odd presence of isolated beech trees even up to ~1500m.