I’m currently trying to get my head around how to tag a multi-storey car park, that has 2 levels, but only half of the parking is actually multi-storey. The other half (the upper right part and the bits south) are just ground-level. There is a single ramp that goes from the ground level to the upper floor, which I marked on the picture. This is what it looks like on bing: 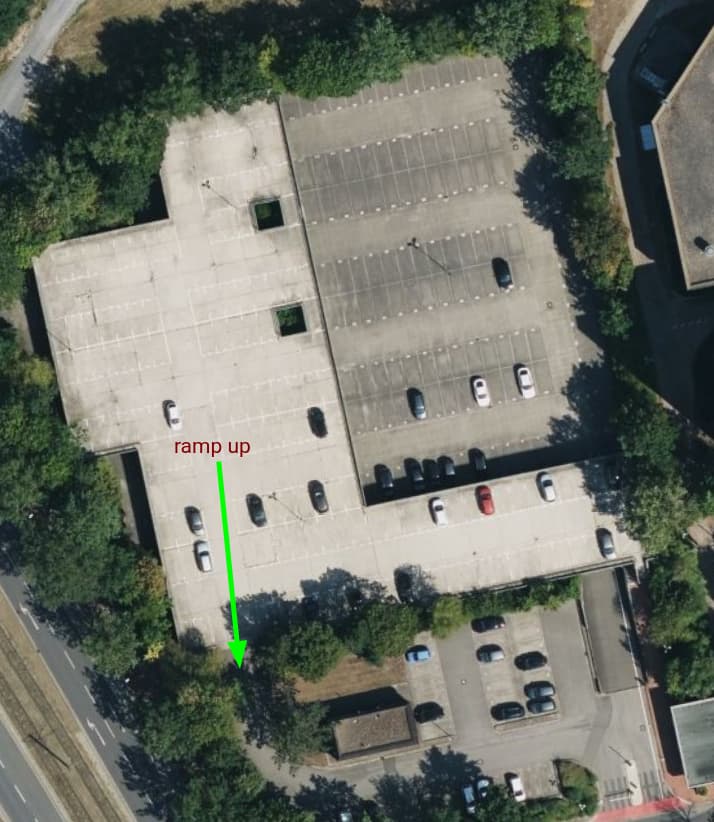 If there are any wiki pages I’ve missed, feel free to throw them into my direction.

Hello. In my opinion it is better to draw 2 separate parking features. As for the roads, if the highway on the roof intersect with the roads highway the building, I would just add layer=1 to the top roads (no bridge=* tag).

And the ways/roads on the building? Just layer=1 and ignore complains about them not being a bridge? And the whole thing as parking=multi-storey or 3 parts, 2 with parking=surface and 1 with parking=multi-storey? Are there any examples I could look at? I found a lot of different approaches how to tag these, but they were all different and no one seems to have mapped the roads on the building, but since there are footways up/down, it would be nice if we could guide people to their parked car properly.

Please specify which validator shows errors? Corrected a little bit, checked in JOSM and in iD, no errors appear. 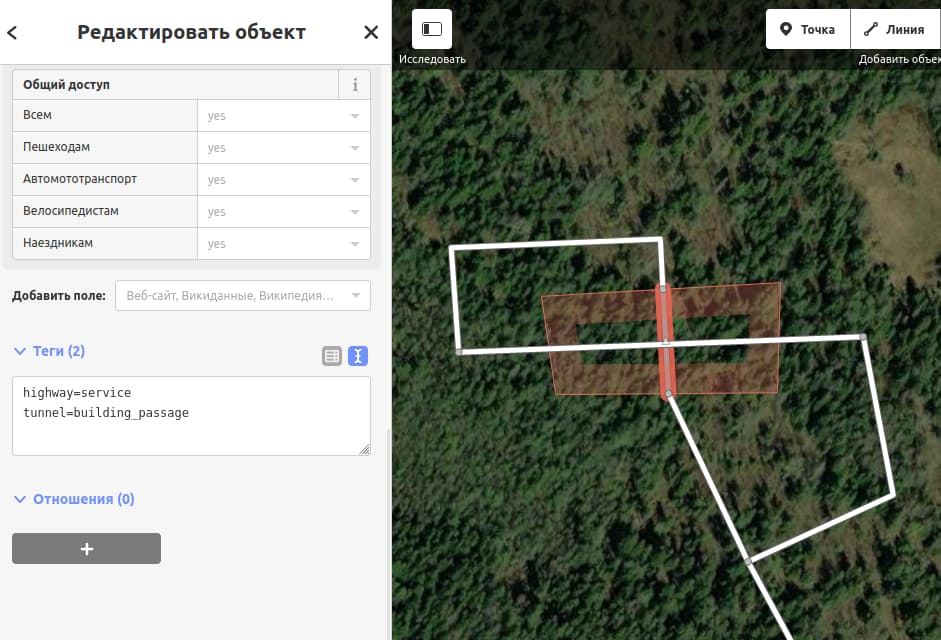 The line of the highway that goes inside the building must be divided at the intersection of the road and the building, while the extreme points near the road must also be part of the building polygon (I don’t know how to phrase it better). A line segment inside a building with the tags highway=service + tunnel=building_passage (see vertical line screenshot).

The line on the roof of the building must be tagged highway=service + layer=1 (do not make shared nodes with the building).

Optionally, you can add tags maxheight=* to the line inside the building.

Thus, only the road that goes along the roof of the building should have a layer tag. In theory, everything should work fine in navigators.

Maybe using the tunnel=building_passage tag is not the best option and someone else will suggest a more correct one, but I don’t know another.

I would not use tunnel=building_passage, as this is not a building passage. There are no walls to the side of the way. Plus, if we work with layers, it’s not needed. Also:

A building passage is a tunnel that goes through a building, but is not inside the building itself

The problem is, that Osmose is pretty much right to complain:

When ways are passing on different levels apply layer=* only to the way which also has the bridge/tunnel attribute. Only ways with one of the tags/attributes tunnel=, bridge=, highway=steps, highway=elevator, covered=* should be tagged with the layer tag, similar for railways and waterways

I’m not much into indoor-tagging, but might level=* be used instead of layer=* for these kind of roads?

A building passage is a tunnel that goes through a building, but is not inside the building itself

The problem is, that Osmose is pretty much right to complain:

A similar question just popped up on Reddit: https://www.reddit.com/r/openstreetmap/comments/10apnvy/how_do_i_map_this_parking_lot_it_has_both_surface/

Update: I settled for the following:

I settled for level=*, because I found the following:

Highways (and other ways) can be also tagged with level=* when they are essentially bound to a floor of a building complex (such as multilevel parking buildings, railway stations or airports).

It’s not ideal, because the upper right area that is not covered now has level=0 without being in the building. But enlarging the building to cover the upper right bit as well, and adding building:part=yes + building:levels=0 seems kinda wrong to me. Technically speaking, it’s probably part of that building, but I’m not even sure of that.

Linters are all happy, routing hasn’t caught up yet, but I’ll keep an eye on it.

Update: Valhalla is perfectly able to route to both levels of the multi-storey car park, so this seems to be a good way to map this.