I created this challenge to re-tag landuse=quarry nodes that have GNIS metadata to historic=mine. In reality the vast majority of these features are abandoned mines. What do you think about this? Is this worth doing in more states? 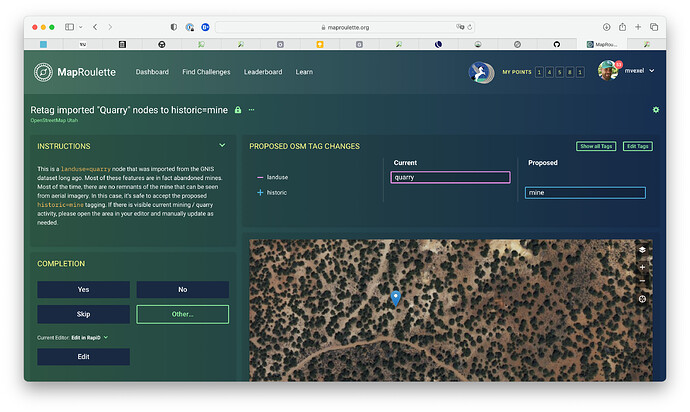 Yes, Martijn, this is a neat challenge. Seldom is a quarry best mapped as “just a node,” and is actually a mine (or an “adit,” a word I didn’t know until OSM, meaning “a passage (often horizontal) into a mine for access or drainage”). Indeed, it may be that man_made=adit is the better tag here, it very likely isn’t “node tagged quarry.” (Though, I recognize the GNIS import for what it was, a long-ago “let’s bring in SOME data into the largely bare-naked USA” import).

When I find a quarry to map (sometimes via visual imagery, sometimes on USGS topos…) I try to map one as a polygon, as these are larger features that “take up space” (area) in the real world; a node feels much too small except perhaps as an initial “gotcha now, map ya’ better later.”

Could the challenge be tuned up with these ideas in mind? It’s neat as is, maybe it could be even better. Even if only a simple update to the text description that perhaps these could become a polygon instead of a node, or referencing man_made=adit as a tag.

Ah yes! Neat challenge! I fix these nodes if I can when I come across them. But there are some aspects that mean that fixes are not so obvious.

Sometimes the GNIS data didn’t have exactly the right coordinates for the mine or quarry, and it’s possible that the correct location isn’t readily visible in aerial imagery.

Also, the distinction between quarry and mine is sometimes not obvious. If I can, I use the MRDS to look up historical records for the location and use that data for the update. Unfortunately, data in MRDS is also often of poor quality.

As @stevea mentions, USGS Topo is another source that can be used to correct the location and type of one of these features. Which works great when it works. And then sometimes it doesn’t work so well. I find that small features like man_made=adit are best surveyed in person to get the correct location.

I also try to tag the resource and often alt_name for the mine and include the MRDS ID in ref:US:MRDS.