Is there a better tagging? (man_made=chute_block)

How would you tag individual concrete blocks in this spillway? Someone mapped them as buildings, I just retagged them to man_made=chute_block that I just invented but maybe there is a better tagging here 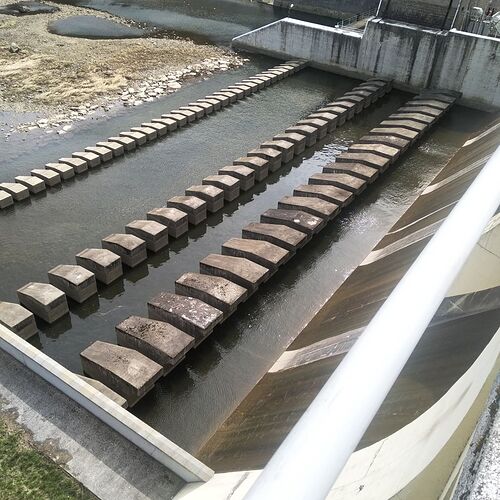 I’d say, man_made=baffle_block, like in the title of the picture, sounds quite good already. The chute isnt blocked, but baffled, by the blocks of concrete. A link to the OSM node/way/area(s) would be great.

Must be a tremendous view, when the weir (In my mind, there is only one, its on top) opens and the chute gets reflected/baffled (I learned the term today) by the blocks. Perhaps there is some literature on wave-brakers (just a rough translation)?

PS: I mapped my share of avalanche protection snow bridges. I rather not map every strut separately, but people have truly distinctive interests.

With such a level of micromapping, I would count 4 weirs that control the flow and level of water.
In that cas, this proposal could be rebirth Proposed features/sluice gate - OpenStreetMap Wiki

I would not say that.

Imho the tagging of the single concrete blocks of a baffle chute is a lot of micromapping work whithout gaining much additional value, tending into the direction of mapping every single element in a linear barrier. From that point of view a better (and more simple) tagging would be to map the linear baffle constructions as linear barriers because that’s exactly what they are - barriers against the free flow of the water. In this case the tag could be barrier=chute_baffles.

Another option would be to tag the whole construction as an area with man_made=baffle_chute.

In that cas, this proposal could be rebirth Proposed features/sluice gate - OpenStreetMap Wiki

Sluice gate is a documented tag in meantime:
https://wiki.openstreetmap.org/wiki/Tag:waterway%3Dsluice_gate

Indeed, compared to highways, the key should be traffic_calming ;-).

Now I am thinking about it: maybe waterway=chute_block would be better as for example waterway=weir and so on use that key?

Sluice gate is a documented tag in meantime…

There is plenty of original ways to control water flow, I’m not sure they all deserve a waterway=* tag. A 2-level scheme isn’t a bad idea IMO.
weir=block, nobody?

Sorry, I did not get you right here. I like the idea of a subkey “flow_control” as it gives the option to group all kinds of flow control like weir, sluice_gate, chute_blocks etc. under one second level subtag. Much better than to create a fist level tag man_made=chute_block anyhow.