How to tag an inclined way with flat areas along it, which enable wheelchair users to rest

a tag is needed for the flat areas that can serve as a rest for wheelchair users on a sloping footway
have marked with a unique tag “wheelchair_landings”=“yes”
I can’t find anything standardized about it.
Do you have something for the situation?

incline=0 may be also/instead used.

Key:wheelchair - OpenStreetMap Wiki may or may not have something

Ok thanks, I can’t find anything, it was in case someone has something similar and avoid parallel tagging

This is analogous to micromapping staircases (or at least longer ones), where some people need to rest after a certain number of steps. In these cases I split the stairs at each landing (turn in the stair) and have a non-staircase footway linking the two flights. So i think you should split your ramp at each level section.

In fact landing= was proposed before in Proposed features/Steps features - OpenStreetMap Wiki for =steps and =footway + incline=, similar to ramp=. As an extension, footway=landing is used.

is there a maximum length for the landing tag?

Scarcely used (250 elements on taginfo) AFAIK, but also there are many places where steps link less steep parts of trails (e.g., here in the Churnet Valley), and the gaps are in no sense landings. These & the OP show that the generic case extends beyond simple flights of stairs with landings, and any solution must respect that.

There’s also the poorly documented stairwell=stair_landing which appears to be an indoor mapping tag proposed for railway stations. There are particular issues about levels with stairway landings which I’ve encountered because one may have several landings on a set of stairs between two floors (e.g., 3 intermediate landings in my local hospital).

It’s not a unique problem. Eg is the small section of =footway between =crossing and =sidewalk a =sidewalk, or some other val is needed? Then there’s the issue of widely spaced steps, almost a smooth sidewalk with some bumps on it.
I would consider that a =sidewalk.

Eg is the small section of =footway between =crossing and =sidewalk a =sidewalk, or some other val is needed?

I have seen footway=sidewalk and footway=crossing being used for them, both are legit and have supporters.

These are essentially artefacts of our centre line modelling of ways which in general can be handled if width tags are present (and even more easily if dropped kerbs, tactile paving etc are mapped). Other equivalents are streams going into a lake which is part of a river: Does one connect them to the river centre line or the outline of the lake? In some GIS data, e.g., NHD, these have an additional attribute of artificial_path, i.e., they are logically necessary for the network model of the system but should not be included in other representations, such as rendered maps.

For single steps widely spaced on a path i have just mapped the step as a node & highway=steps with step_count=1. I’ve been less sure about what to do when the steps are roughly 1-2 metres apart.

For single steps widely spaced on a path i have just mapped the step as a node & highway=steps with step_count=1. I’ve been less sure about what to do when the steps are roughly 1-2 metres apart.

I could not find any suitable tag so just used wheelchair_landings=yes, though I see it has subsequently been updated to landings=yes which seems less clear to me, but I do not plan to change this.

Note this is not a landing in the sense of an arrival point - it is a rest location. This technical document has a summary:

Another example of a location with wheelchair rests is the Jane Coston bridge in Cambridge: 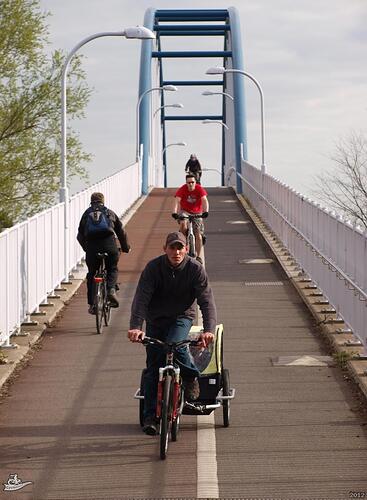 CycleStreets Photomap: Bike commuters to the Cambridge Business Park and...

Bike commuters to the Cambridge Business Park and Science Park. This picture of a school run over the Jane Coston Bridge is part of a series of everyday cycling and commuter cycling taken during the morning rush hour in

It is not appropriate to tag these as steps, as they are not a step.

From a routing engine perspective, dividing up the way into lots of sections and making flat sections is not sensible - it would be hard for a routing engine to turn this back into its real semantic meaning, which is a standard inline but with resting points. Admittedly though the user might want to know the distance between landings to judge the amount of effort they would need to use, so node locations could be useful.

I don’t think incline=0 is very clear, though I suppose it could be OK if used on a node on a way that already has incline=*.