How to tag a rock garden?

On my college campus, we have a “rock garden,” where the geology department has placed a bunch of notable rocks they have collected in the field. Here is a picture of it: 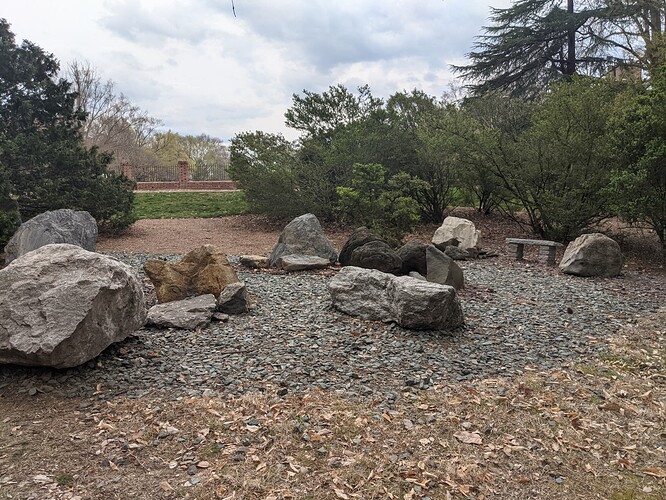 I’ve been micromapping this part of campus, and would like to tag the garden area as well as the rocks within it. How would you suggest I tag the garden? My first thought was to use leisure=garden, but that seems to be specifically for plants.

Thanks for your help!

Oh, I like garden:style. There is also a zen garden on campus that I’ll be sure to tag properly.

This rock garden doesn’t seem to fit any of the existing categories, so I might hesitantly use a new garden:style=rock tag.

Edit: looks like rock_garden is already being used in a few spots, so I should go with that. Thanks @Grass-snake!

agree, I could even imagine a rock_garden be a garden:type

Might be worthwhile to map the larger rocks individually. Considering how much effort the department spent adding them to the display. They will probably appreciate your effort including thier work as part of your mapping of the campus.

Although this garden area contains rocks, it doesn’t look to me like a rock garden, which is a very specific way of displaying particular plants: often alpines. There looks to be fairly minimal planting here and given benches etc. foot traffic is allowed.

Typical rock gardens have extensive labelled planting with often sinuous paths through them allowing the plants to be seen, but not damaged by trampling.

This is a different sort of garden feature. We could do with a more generic scheme for tagging such features whether as part of a larger garden or as a standalone feature in an urban streetscape.

this is not a garden or leisure=garden

I would likely start from tourism=attraction with description and wikimedia_commons tag linking to photo uploaded to Wikimedia Commons.

I digress, this could be seen as a garden, rocks in exposition, a bench, the way the surface is treated (ornamental “pavement”/these small stones on the ground are laid out in a planned way, with decorative intent, apparently).
Maybe exposition site could be an alternative, and agreed this isn’t the typical kind of garden, but there are already many different kinds of gardens in the leisure=garden box, and subtags like garden:style and :type to distinguish them.