Could we have a emoji :thumps up: as reaction?

3 posts were split to a new topic: Additional emojis not showing up on desktop

Someone requested thumbs down as well

these are the reactions we have in the Telegram off-topic group: the order of the emojjis we could add is not particularly useful, but we members of that group use the as +1, -1, +2, pensive, saddened, -2, (missing: laughing face, for which we put +2).

If you react to a post by using the button like (heart) or thumbs_up in both cases the red heart will appear among the action buttons (bottom line, right side). This is well known and has been criticized earlier. It has been requested to replace the heart by the

but no result so far.

If you choose any of the other buttons available (like frowning face for instance), the chosen emoji will also appear in the bottom line, but at the left side (the heart icon on the right side is not affected in this case).

If any emoji is already placed on the left side and another user choses to give this post a like or thumbs up, the corresponding icon will be placed beside the already existing emoji there.

. Apparently it is possible under certain conditions. Can we get this working as standard setting?

I’m merging these messages back to the original topic because they are related with the work being done there.

I am aware of that and mentioned this in my original post. Nevertheless the thumbs_up emoji is well visible under certain conditions and that’s why I decided to open a new topic for this.

In general I would prefer to have all reaction emojis (including the heart) shown below the post in one place exactly as they were given (instead of some on the left side and some on the right side).

Hey @nukeador, do you think it would be possible to split the discussion about thumbs down to a separate thread, and keep this one about adding the thumbs-up as a reaction / making it the default +1 reaction? I’m don’t have a strong interest in the upvoting/downvoting discussion, but currently I cannot follow the discussion about the former without sifting through a lot of interspersed messages about the latter.

Thanks for taking the time to investigate the thread splitting possibility. Too bad that’s not a viable option.

I am not involved/invested enough with the thumbs down discussion to do justice to all the raised arguments in a summary, but hopefully someone else who is may start such a thread.

Is this working as expected?

!!
Final question: Does the receipt of a “like” as well as a “thumbs_up” after changing the setting activate the counter of “likes” received (having some effect on gaining higher trust levels)?

should increase the likes count.

Hmm, I have to come back to this issue once again. Apparently “liking” any post by clicking the heart nowadays does not increase the “likes counter” any longer but is considered as a “reaction” like “laughing” or else instead.
I just stumbled about that by chance. All “likes” given to posts later than you fixed the setting on Oct. 20 appear in the list of “reactions” received and no longer as “likes” received. These “reactions” are definitely not included in the likes count.

Maybe someone could crosscheck …??.. it doesn’t bother me but I think it should be known as the likes counter has some effect in regard of the TL and badge business …

I’m not sure, it might be the case that if we change the current settings, if you click 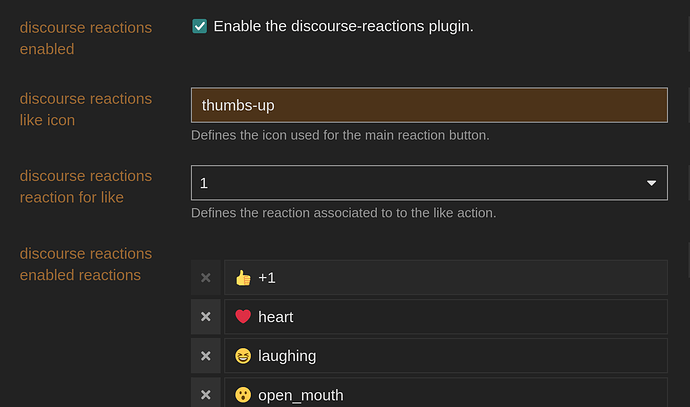 given prior to your fixing on Oct. 20 also have been adding “like” counts as well. In the list of “likes received” these are represented by showing the 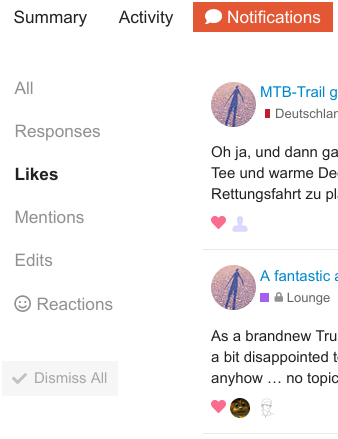 but if you check the posts the reaction given was the

Btw: I am not really into the setup, but I can see there is a difference in the setting of “enabled reactions” between

My interpretation is that

is not. Maybe it would help to simply enable the

Any news about this issue?

Unfortunately this requires some investigation time I don’t think @Firefishy or I have at the moment.

If someone has some time, maybe worth asking directly as a support question to the Discourse Reactions maintainers:

:discourse2: Summary Discourse Reactions allows users to React to a post from a choice of emojis, rather than only the Like heart. The available emoji selection can be set from the admin settings. 🛠 Repository Link...

OK good idea, I have done that and will come back with the reply.

You don’t want a case where people are afraid to speak up publically against a comment, and hence it looks like everyone agrees

seems we have settled for this situation. I have an example, where I’ve written a question about the DWG intervention policy, and I quickly got two very negative replies, which we’re not allowed to downvote since there’s no

luckily there was someone who dared comment “I disagree”, and he collected slightly more

than the negative replies.

in my opinion the idea that not allowing to downvote is helping the mood on this site is … weird? however well intentioned, it does create the impression that everyone agrees with everything written here.

the only reaction similar to

, which definitely is not the same: most often, when I disagree, I just disagree, I’m not angry … or the

, which again is a mood.

15 Likes
Could we have a :thumbs_down: reaction?
← previous page