City gates and streets underneath them

How do I tag a city gate and the street underneath it? Do I have to apply layer=1 to the city gate or I should use tunnel/covered=yes on the street below it?

If the gate is repredented by an area, I’d tag the road underneath with covered=yes.

I’d tag the road underneath with covered=yes

And I should leave the layer=1 on the city gate?

I think it can be removed as it is common sense that a building is above ground level.

I’d tag the road underneath with covered=yes

And I should leave the layer=1 on the city gate?

It is up to you, the gate has to have a higher layer than the road. For this situation, tunnel=building_passage is maybe preferable according to former discussions (some people say covered is to be used when the thing is more open than closed and tunnel when it is closed on both sides), but personally I would use tunnel only if the way is significantly longer than high.

layer tags are not referring to ground level, don’t get confused with layer=0 assumed to be the default. Typically you would give the part with the “modifier” (bridge/tunnel/covered/etc.) the layer tag and add only 1 layer tag when 2 objects intersect locally, i.e. layer=-1 on the road, but technically it shouldn’t matter where you put it.

Reading the wiki, covered=yes there’s nothing written denoting the suggestions above, although based on wiki of tunnel=building_passage which denotes that building_passage should be used for ways that go through a building and by no way offer entrance into that building.
Someone reading the wiki wouldn’t understand that covered=yes should be used for such cases (of ways that go through a building that also offers entrance into that building). If this topic didn’t mention that tag, I would keep tagging tunnel=building_passage every tunnel within buildings, because that’s what seemed reasonable and mostly used 2 years ago when I started tagging them

Reading the wiki, covered=yes there’s nothing written denoting the suggestions above

The truth is, there’s nothing written on that page 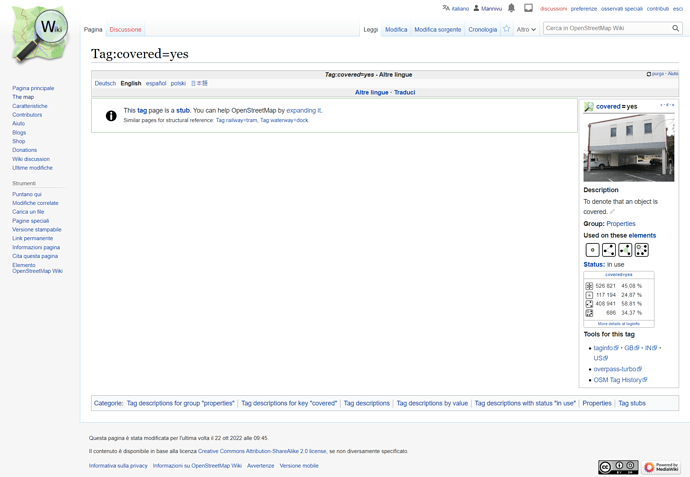 I wasn’t aware of this restriction, but the city gates I have in mind have the entrance at the side from inside the walls, not from the passage.

I have seen some city gates which have a door within the passage.

Checking on the Wiki this is not completely true.

The walls at both sides (and the top) of the tunnel are considered outer walls of the building, which can have entrances that lead into it.

So the wall can have entrance to the building, but the building passage shouldn’t take the user inside the building (so I think this refers to something like a driveway that leads to car parkings inside a building? I really don’t know). Moreover, I always thought that a covered=yes tag suggested that the way has some coverage above, but there’s no proper wall on the side (for example in the fuel stations).

Anyway, I think that building passage is the best tag to use when tagging streets under city gates (should this be written in the Wiki?).

So the wall can have entrance to the building, but the building passage shouldn’t take the user inside the building (so I think this refers to something like a driveway that leads to car parkings inside a building? I really don’t know).

the tag is used for different situations, one is a pedestrian passageway through a complex of buildings with possibly shops at the sides (somehow a shopping mall)
some examples
https://commons.wikimedia.org/wiki/File:Interno_Galleria_Guerci.jpg

Maybe they wanted to exclude situations where the only purpose of a tunnel is to enter the building, rather than being a passage that leads through (and out again)

I would see it more generically, it is for situations where you go through a building and remain somehow “out”

I’d say your example photo is a building passage. But if they closed off one end so it became impossible to walk through to the other side, it probably should no longer be tagged that way.

Thank you, now I understand what the others were saying!