Hi! So, I’m still a new mapper, but iD is smart enough to warn when I try to add unconnected roads. However this “1210 not-connected highway/cycleway / Small highway group apart from the main network or with insufficient access upstream” seems to only hit Osmose (and even then, is not something that normally pops up on that site with green squares). I got a bit scared at first because every small road, not just the few ones I added, started to get warning Level 1 errors!

But in this case, I hit a strange warning that actually seems to make sense. But I’m really in a place that does not have a motorway and really makes no sense creating one! (in this case, Santo António, north of São Tomé e Principe, which is a CPLP country like where I’m based).

So my question is: what you here could recommend? I read the “how to fix” but still unsure if it is just to do that without asking feedback.

The real use case

This might change over time, so I will also add an image for future reference 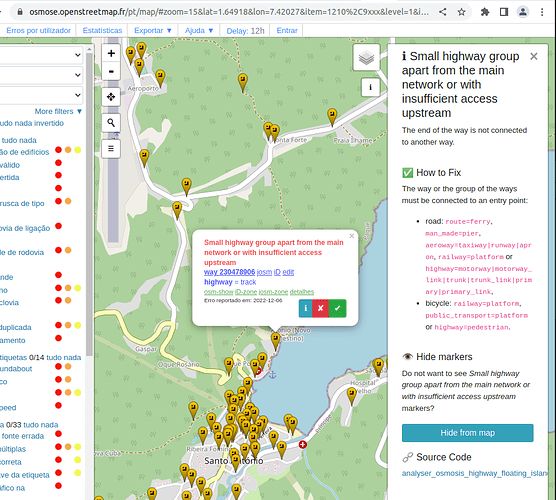 Copying and past the message from osmose

The problem by Osmose seems to me that there is not at least one primary on Principe.

One solution to overcome this would be to upgrade at least one secondary road on Principe to primary.

A second possibility not so much “mapping for the tool” would be to introduce a ferry line from Sao Tomé to Principe connected at both ends to the road network since at least a passenger ferry exists.

I got a bit scared at first because every small road, not just the few ones I added, started to get warning Level 1 errors!

Osmose generates lots of warnings, but not all of them are real problems - it may be just a bit confused here looking at the roads on a small island.

Truth to be told, warning actually is quite hidden (not as bad as I commented)

@SomeoneElse To be fair, actually this warning is somewhat hiding:

Only when clicked (despite being 0 zero) it shows

@seichter humm, I was not aware that in addition review the routing to pier / airport / Tag:highway=motorway, also Tag:highway=primary could be an strategy. 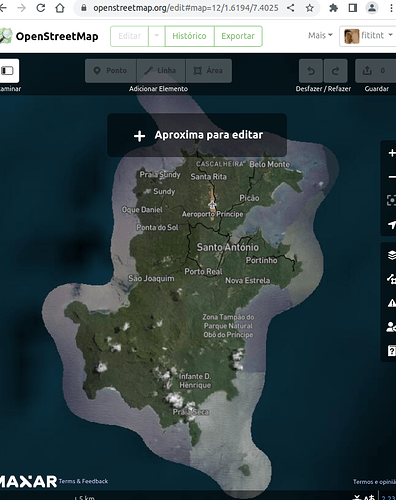 I know that there’s even smaller islands (which obviously would not support primary because would be just one settlement) but considering the description of Tag:highway=primary be “A major highway linking large towns.” depending of what is “large town”, this would change from a country with population of 223.364 (this example) an town in a country with 1.393.000 (like India).

So, in theory, maybe one of these roads are primary.

about ferry and other details

About ferry, yes, it does have. Transport in São Tomé and Príncipe - Wikipedia .

Some tourist sites like this one São Tomé & Príncipe | São Tomé & Príncipe mentions ferries (but for tourists tend to recommend Inter-island Flights). So in theory, except by highway=motorway, it somewhat could have all the things, just that the scale of population is different (which in this case clearly affect the highways). But yes, the idea of primary/secondary/tertiary was clever!

To be honest, I wouldn’t worry about hdyc warnings either, at least not initially.

For example, apparently I am responsible for 19,000 Osmose level 3 warnings (I’m not). Just looking at the first example from that list, this way (added from one source) overlaps with this way (added from another). It’ll likely need an on-site survey to resolve it properly, and it’s good that the Osmose warning exists so that other mappers can see that they perhaps ought to have a look at it.

It would be definitely the wrong thing to do to try and reduce the number of warnings given by Osmose rather than trying to get the mapping correct (matching what actually exists on the ground).

Since things are bit more complex, I also created an issue at

**Please give a look at https://community.openstreetmap.org/t/1210-not-connected…-highway-cycleway-small-highway-group-apart-from-the-main-network-or-with-insufficient-access-upstream/6421 .** Potentially related issues here: - https://github.com/osm-fr/osmose-backend/issues/339 - https://github.com/osm-fr/osmose-backend/issues/570 - https://github.com/osm-fr/osmose-backend/issues/1053 - (likely a few others) --- While I somewhat understand the code behind the query (but not as experienced with OpenStreetMap data model), could someone give a hint on how this could work? Note that I'm not asking to "correct" or disable (in fact, neis do not even show this on the count, so this already is less visible) however I'm genuinely interested in know if there is something that could be done in an example like this https://osmose.openstreetmap.fr/pt/map/#zoom=15&lat=1.6492&lon=7.42027&item=1210%2C9xxx&level=1&issue_uuid=9e224030-7fc5-0f61-0d7e-128d7467b7eb (The place does already have an airport, and also a pier (both maybe just miss some tags) and even with some work, it is likely that this place could already have an highway=primary. However I'm curious if at least the airport and the pier may be just missing some tag.) Thanks!

Not sure if can mark some answer as solved right now, but for example even an smaller island (see False positive: Small highway group apart from the main network or with insufficient access upstream · Issue #339 · osm-fr/osmose-backend · GitHub) with less options to detect be routable had something similar to this warning, so if not a bug from the rule, maybe some tag is missing.

I have discovered a similar situation in a Swiss canton. I don’t know if it has the same origin, but it seems to be related to the missing “highway=primary”. Presumably, if the cantonal borders were different, the error would not exist.

I have discovered a similar situation in a Swiss canton. I don’t know if it has the same origin, but it seems to be related to the missing “highway=primary”.

I don’t know the situation exactly, but if that Swiss canton contains an isolated street network, it is really an error/incompleteness. Cars in that insulation won’t get there by air transport or ferry

but if that Swiss canton contains an isolated street network

No, it didn’t. More for fun, but with the this routing we start in Liechtenstein, drive through Switzerland and through the faulty area, cross Austria and end in Germany.
We cross four European countries without any problems. The Swiss, Austrian and German Autobahn (motorroad/motorway) are used. So “isolated street network” I don’t see any here

The canton “Appenzell Innerrhoden” is even crossed by a highway=secondary, but not by a “highway=primary”.

I’m following the GitHub comments, and I think the example you mentioned was actually a different issue, so it was asked to create a different one. Here’s the link for others interested in the future

Item 1210 Class 4 only checks for connection inside admin level 4 borders?

I was also somewhat curious how the osmose was able to calculate so many things at once, so it seems that it breaks things by blocks (e.g. not the entire country), but this is likely to be addressed in the validator.

But a priory, likely the pier and airport of my example, have some missing tag. We’re likely to know soon. But the thing about know if things are routable is not as trivial, it really needs to test the routes.