Top of the morning!

I noticed some time ago that there is some controversial documentation on the wiki regarding the mapping of footway=crossing+cycleway=crossing vs. path=crossing. Since I’m currently trying to collect all these loose ends and derive the really™ proper™ tagging for these paths, I noticed that the tag path=crossing is indeed not part of any proposal. It was simply added by the user Tomasz W in this changeset. While it adds a nice table with examples, it also postulates the use of path=crossing, whereas all other pages (plus the original proposal) contradict this by saying that one has to use both footway=crossing+cycleway=crossing.
So the page currently contradicts the approved proposal, which never even mentions path=* (but says "[…] a way connecting the sidewalks on the two sides of the road should be mapped […] footway=crossing. Additionally, if the crossing is also for bicycles, you should add cycleway=crossing"). The footway=sidewalk Wiki-page also lists path=sidewalk as a common mistake, which makes path=crossing even more controversial.

The path=crossing-Wiki-page also redirects to footway=crossing, but not so for the Polish Wiki-page for path=crossing which makes it look like this is/was mainly a Polish tagging-agreement.

I tried to find at least some sort of discussion about the change, but to no avail. I sent that user a message via OSM and email - no reply after one week. Does anyone know anything about a discussion that I’m unable to find?

I think that’s a misunderstanding: footway=* is not a subtag of highway=footway. A lot of people even wanted footway=* to be an independent tag, usable without any highway=*. In the proposal, it’s explicitly stated that it can also appear on other highway=*-types, e.g., highway=steps. Digging further, cycleway=crossing says:

Use cycleway=crossing together with a highway=* tag to indicate a place where cyclists cross a road. […]

There is a very rare usage (global: 57) of “segregated=crossing” too:

A web based data mining tool for OpenStreetMap which runs any kind of Overpass API query and shows the results on an interactive map.

ok, that is really not very intuitive

Looking at it again, there is also no page stating that footway=crossing and cycleway=crossing should be used on a highway=path that is designated for both and crossing a road. There is no documentation for that case at all, at least not on the pages you linked to.

There is no documentation for that case at all, at least not on the pages you linked to 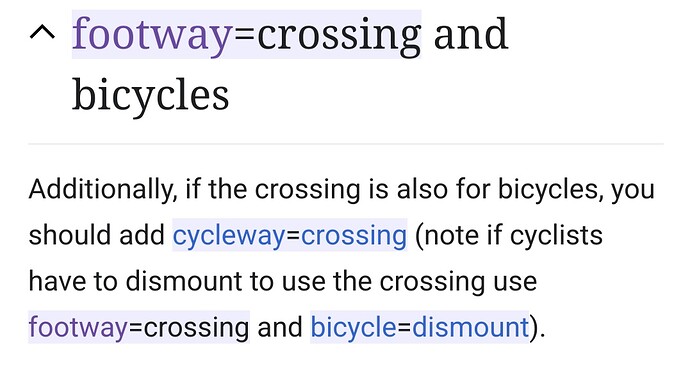 I read that as: add both. But nevertheless: I’m fine with either, I just think it should be introduced properly and also documented. The way it is right now, it’s just a mess.

Osmose has complaint - which I consider as unwanted and misleading - about highway=path footway=sidewalk for combined footway/cycleway which are sidewalks.

Some people in Polish community believed that this Osmose warning is a correct one and retagged many ways (some of them were using path=sidewalk / path=crossing, some were removing correctly tagged footway=sidewalk footway=crossing)

On the discussion-page of the original proposal, it’s even mentioned that it will be added:

Apparently he later forgot to add it to the documentation

But the point is: it should be decided how this is tagged properly. Would we need a new proposal, or can a simple amendment be handled directly by the tagging mailing list?

Definitely sufficient in cases when there is no real opposition.

Also, this tagging is used already. I am not a great fan of it, but it is also not terrible.

collect all these loose ends and derive the really™ proper™ tagging for these paths,

Please let us know when you’ve got it worked out, as it’ll be good to see!