Mapping a board walk to a view point

However I am not sure how to map a board walk to a view point, I’ve attached a photo that explains the situation. I was thinking of adding a noexit=yes but how do I capture that the viewpoint is only accessible via the boardwalk? 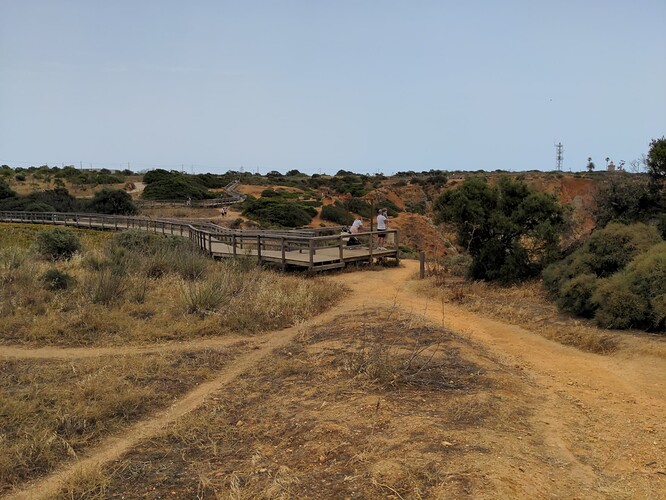 highway=footway surface=wood seems suitable to describe the boardwalks.
I would question your assessment that the “viewpoint” is only accessible via the boardwalk, the guardrail does not seem to prevent most people from entering the platform from the dirt path aside, although it may constitute an unsurmountable obstacle to some people, it seems more of an ornamental thing then an actual barrier.

The boardwalk is already properly tagged (as bridge=boardwalk) and the viewpoint as well. I would connect the viewpoint to the end of the boardwalk. noexit=yes does not apply imho as it is easy to slip through the railing and enter the dirt tracks all around.

Thank you both. Regarding whether the boardwalk should connect with other paths, I am of the opinion that unless there is a way to clearly state there is an obstacle of climbing over or under the barrier then they should be separate.

Here is another example of where a dirt path meets the boardwalk, which even as an able bodied person I found it hard to climb onto the boardwalk. As OSM is used by a lot of hiking and navigation apps I feel it wouldn’t be responsible to map these routes without adding in the obstacles.

I have been reflecting to the pic in your post. I understand the platform where the people are standing is the viewpoint (end of the boardwalk).

… how do I capture that the viewpoint is only accessible via the boardwalk?

Btw. I know a couple of places with such boardwalks, too. Most of them are build in protected areas to avoid visitors to trample all over the place and destroy the fragile surface. If this should be the case in your area you could consider to tag the dirt tracks with access=no (but only if this is the official regulation),

If I have understood this correctly then I think in this case I might just leave the boardwalk disconnected from the rest of the paths at the end. This should stop routing and similar in my eyes to mapping the carriageways separately on a road with a physical barrier down the middle (standard mapping even without a gap).

The boardwalk can of course also have a handrail tag to emphasise the point or even have the last section as an area highway with the handrail mapped as a barrier.