How to properly map this park?

Hi, there is a park/children’s playground which I would like to map better than it currently is mapped.

Here is an aerial image of the park: 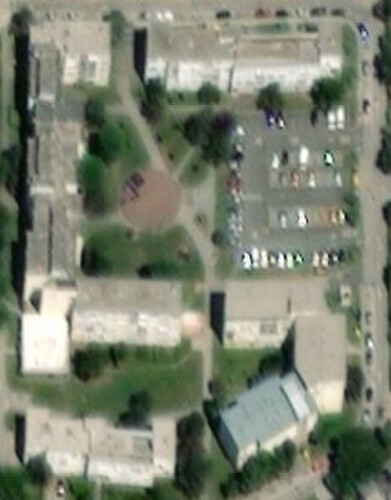 So I am wondering what is the best way to plot this? If we plot it as a pedestrian area instead of the path, then the circle part will not be distinguishable from the funnel part.

Any help with this would be appreciated.

Create a polygon for the “middle circle” and tag it highway=pedestrian. Assure the highway=path ways connect directly to it, and then simply “end.” You could also do a similarly-tagged polygon for the “funnel” and (it’s fuzzy to see quite exactly what might be best) you could add a path between them, touching in one, two or three places, or adjust according to reality with those two “areas.” You could even make the two areas “kiss each other” by sharing a single node, if that’s a good representation of reality.

I have never used highway=pedestrian on an area so far myself. Is it not common practice to use the tag in this case together with area=yes? Just asking cause I saw that in the wiki.

I’m not sure if area=yes is helpful, or simply what might be a directive to a renderer (which seems like tagging for the renderer). Maybe, maybe not.

Thanks, I was just interested - and the comments in the wiki do not always reflect the common practice.