The maps show a huge 1500m deep crater in the middle of mountain (Grand Muveran, Switzerland), which is clearly incorrect.

Is there a way to flag this to get it fixed or reviewed? 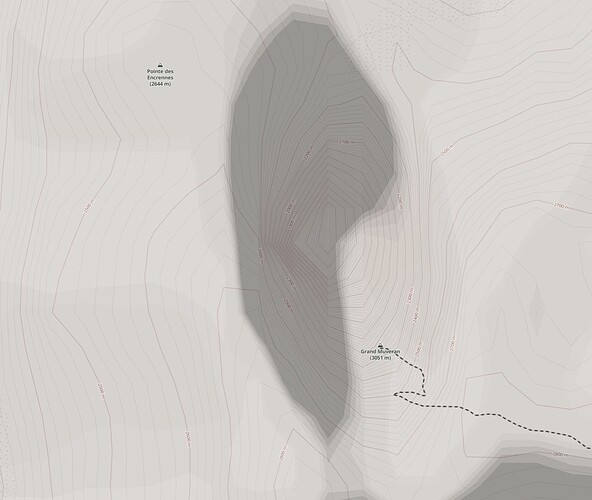 Which map is it? OpenStreetMap doesn’t host elevation lines, so you’ll have to ask the map creator what 3rd party source they used.

Most contour lines shown on maps derived from OSM will be largely based on two open source datasets: SRTM and Aster. In mountainous areas these often have artefacts like this because of how the data was acquired. Sebastian de Ferranti with some assistance from Christoph Hormann (@imagico) worked to remove many of these artefacts, (see various pages on View Finder Panoramas). I normally use their corrected data when playing around with data in the Alps & Himalaya.

This looks to be from the ThunderForest Outdoor style, which presumably uses uncorrected SRTM data. Decent elevation data is now available under an open licence from SwissTopo, but I presume updating elevation data is largely a low priority for ThunderForest : in general once created it can continue being used & the main effort would have taken place quite some time ago.

Either way the place to raise this as an issue is with ThunderForest directly.

Either way the place to raise this as an issue is with ThunderForest directly.

One further thought is that national elevation data is likely to use different vertical datums from SRTM and integrating the two without artefacts (typically appearing as steps) might be quite fiddly. A trivial example is that Mont Dolent is given a height of 3823 m by the French IGN and 3819 by SwissTopo.