I visited a retention basin earlier today that hasn’t been mapped yet other than for it’s “dry” use as a park. I’ve mapped the wetlands and missing bridge from imagery, but the information board (see from Geograph picture below) indicates that the earthworks are part of a retention basin. 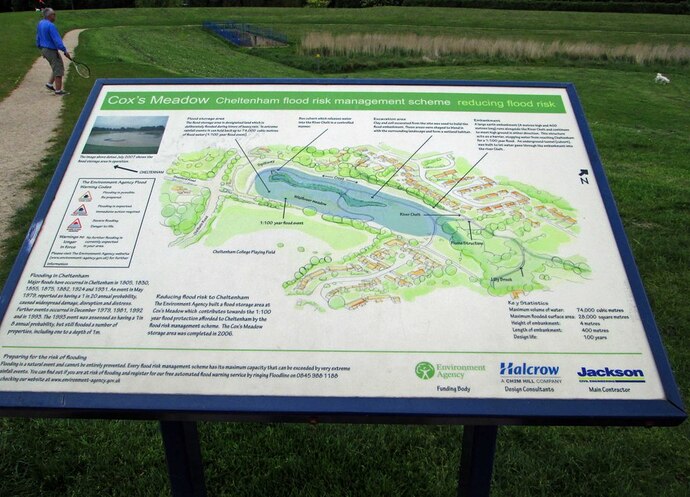 Presumably this should be mapped as landuse=basin + basin=detention, but I’m not sure where to draw the line (in the literal sense). My pictures of the earthworks are decisively undecipherable, how are the extents of these sorts of features normally determined? From what I could see in person the extent on the map didn’t correspond to any visual features on the landscape and copying other maps is generally forbidden in OSM so what should this be based on? Does the Environment Agency have any data cleared for OSM use?

Don’t you have access to accurate elevation (altitude) data ? This could help to have a sense of the bassin shape.

Some EA data - for example here - is OGL 3.0. I’m not aware of any that provides “normal extent of a detention basin when full” though.

I mapped the extent of the largest example near me** by going and having a look when it was full, and recording GPS traces for the banking when it wasn’t.

As an aside, typically that one has water in it under two circumstances - when someone has opened the gates to let water in (as far as I’m aware, difficult to know remotely) or when the river just upstream is higher than a certain amount (which is available in real time, and I’ve created an “OSM overlay” map based on that).

** I didn’t originally map it and I’ve not changed the tagging there yet.

Is OGL 3.0 data OK for inclusion? The wiki page is a little sparse and the UK page implies it might still need a check with the source and special tagging.

Unsurprisingly it seems that this feature and the flume feeding it have their own measuring stations, I hadn’t thought to check for those. Not sure if it’s possible to sign up for alerts for a specific station, I think I’ve signed up for more generic flood warnings at some point previously.

Is an intermittent=yes tag generally considered redundant for a detention basin? Presumably are already encouraged to ‘go easy on the blue’ with them being normally dry.