My problem is that the antennas is not on a mast but on a chimney.

That Tags would you use ?
\LarsBG

Have a look at the wiki page for man_made=chimney:

If there is a mobile phone base station or microwave antenna attached to the chimney you can use the following tags:

I think that is what you are looking for.

But if i understand the wiki it also, Requires
man_made=mast or tower:type=communication
And that that is weird as it not a tower.

I do not think so, just add communication:mobile:phone=yes to the chimney as described above.

I don’t think it is good tagging to add 2 “man_made” tags to one node. If you try you will get a conflict at least by using iD editor.

I would just use the chimney as replacement for the tower and add the antenna to it. Simple solution and it fits to the description in the wiki page for man_made=chimney.

This is a common problem with the various wiki pages, they do not correspond to each other. I am quite sure, the comment in regard of the antenna has been added to the wiki page after more and more antennas had been mounted on top of disused chimneys, which is not a bad idea anyhow. Why not use an existing chimney instead of building an new tower? Makes sense to me in any case.

Nevertheless it would be a good idea to add this detail to the wiki page for communication also.

according to the wiki, man_made=antenna is required, and it makes sense, use 2 objects, one of the chimney and one for the antenna (attached to the chimney):
https://wiki.openstreetmap.org/wiki/Key:communication:mobile_phone

according to the wiki, man_made=antenna is required

According to the wiki page there is no additional man_made tag required. It is even explicitely mentioned on that page (which I have overseen before):

Antennas on a supporting structure mapped as a node, such as a power pylon: add tags to that structure.

So the description corresponds to the page man_made:chimney proposing the same tagging. Just add the tag communication:mobile_phone=yes to the existing structure (here a chimney).

you are right, and I believe the wiki is not very good here, because an antenna is a different object than a chimney, hence they should not be mapped as one.

you are right, and I believe the wiki is not very good here, because an antenna is a different object than a chimney, hence they should not be mapped as one.

An antenna is also a different object than a man_made=mast oder man_made=tower. These tags go together without man_made=antenna as well. Would you like to add a man_made=antenna tag to all these kinds of support constructions or is it the combination with chimney specially you don’t like? 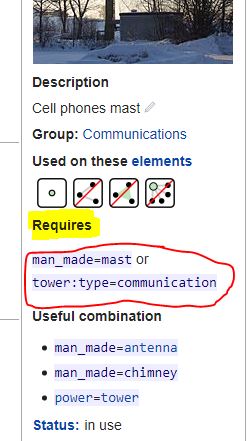 https://wiki.openstreetmap.org/wiki/Key:communication:mobile_phone
How do you understand “Requires” in this content ? English is not my first languide so it may be i misunderstand that Requires means.

Not required. My answer refers to another tag. Please, check the discussion thread.

the question is not that I “don’t like” chimneys, it is a general consideration and you are right that it applies to towers as well. For masts, the situation is more complicated, because sometimes the mast IS the antenna, while in other cases the mast has an antenna (or several of them) attached.

On the other hand, “communication:mobile_phone” could be seen as the property of a tower (a tower for enabling mobile phone communication) as this could well be the purpose. For a chimney, the situation is different because it has a distinct purpose and the antenna is just a secondary use.

I would not have a problem with generally tagging an additional “antenna” to every support construction (tower, mast, pole, chimney …) carrying some devices for transmission of mobile phone signals although I believe it is quite clear that any of this structures tagged additionally with “communication:mobile_phone=yes” incorporates at least some steel frames to hold the devices needed for this service. Therefore I do not see any additional value in generally adding an “antenna” tag.

Both the wiki pages for key:communication:mobile_phone as well as man_made=chimney recommend a tagging without an additional “antenna” tag. The wiki page for man_made=antenna itself says

There are some tags that incorporate an antenna, these may be used in preference.

followed by a list containg (among others) man_made=tower and man_made=mast. So all of these wiki pages would require some revision in case the “antenna” tag should be added to any substructure generally.

I did not say add an antenna tag to the chimney, what I said was map the antenna separately from the chimney. If you add start_date=1960 it is not clear whether this is about the chimney or the antenna (for instance).

OK I must have misunderstood you, shame on me …

… so your suggestion is to place two nodes besides each other, one for the chimney (tower, mast …) and one for the antenna which then will get the additional communication tags?