Are there any so-called 2-1 roads in Finland? 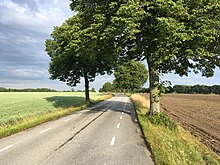 A 2-1 road (2-minus-1 road) is a type of road with extra wide shoulders, and a smaller single two-way lane in the middle for vehicles. The shoulders are to be used by pedestrians and cyclists, and if necessary by meeting vehicles. The purpose of the road is to give more space to pedestrians and cyclists and thereby avoid constructing new dedicated pedestrian and bicycle paths, especially in areas where new constructions are to be avoided or not possible. The road-type is popular in Denmark where...

According to the rather short wiki article, there are in-use in Denmark and Sweden. This is the same as the chaucidou in France.

It is somewhat related to similar concepts known as “advisory cycle lane” in Britain and Ireland, “Schutzstreifen” in Germany and “Fietsuggestiestroken” in the Netherlands and Belgium.

There are some but I wouldn’t say they are common or well known. They are called “kylätie” which literally means “village road” and the first one was opened in 2018. This article has quite well written info (in Finnish) and couple of pictures: Mikä kylätie? – yksikaistainen ajonopeuksia hillitsevä ratkaisu oudoksuttaa

For example this is the one most in Helsinki region could know of, since it was quite heavily featured in news when it was announced: Way: ‪Ainontie‬ (‪317953996‬) | OpenStreetMap

Thank you! That’s weird, it even has a bicycle pictogram. Don’t normal cycle lanes in Finland look the same (i.e. also with the dashed line)?

Dashed lines should be used only if there is a reason to allow vehicles to cross that part (e.g. bus stop, parking, intersection). Otherwise cycle lanes should separated from other lanes with closed line. Though traffic sign for bike lanes is little bit misleading with it’s dashed line.

Hmm, “should”, or “are”? That even cycle lanes that are marked with a continuous line become dashed lines at intersections etc. is normal. Is that what you mean?

As I read the (auto-translation of the) legislation, cycle lanes are actually defined to be exclusively or also dashed lines:

And I wonder, even if both dashed and continuous lines for cycle lanes exist (sources for that would be great, or mapillary / streetview images), how would the 2-1 roads in Finland differ from normal (dashed) cycle lanes? (After all, we likely want to tag cycle lanes on 2-1 roads different from “proper” cycle lanes)

Hmm, “should”, or “are”? That even cycle lanes that are marked with a continuous line become dashed lines at intersections etc. is normal. Is that what you mean?

Yes thats right. I’m saying should because bicycle markings on the road are sometimes a mess, even municipalities don’t always know what they are doing.

So when using dashed line, use wider markings with 1:1 proportion and when using solid line use wider markings. It doesn’t say that bike lanes should be exclusively either, it really depends on the situation. See this example, where line changes to dashed when coming near the exit of a driveway. Mapillary There’s a good set of images on that street with multiple different expamples.

I would say kylätie differ from bike lanes in couple different ways. There aren’t any traffic signs indicating bike lane (E13 Pyöräkaista), pedestrians are allowed to walk on it and other vehicles are always allowed to yield to the side because of dashed lines. Because it’s still a quite new thing, there is usually custom sign telling drivers that kylätie begins. Two-way lanes are not that common either atleast on public roads.

Hm I see, dashed markings are used also when there is a parking lane beyond the cycle lane. I.e. everywhere where cars may pass through the lane: 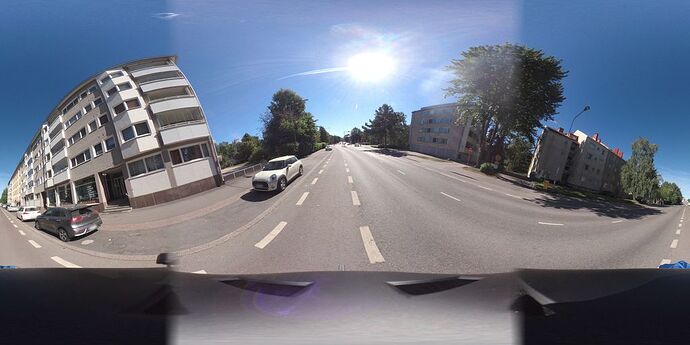 And advisory lanes, 2-1 lanes etc, i.e. lanes that are usually

I wonder , would a distinction in Finland make sense? Or are all cycle lanes, be it in a kylätie or somewhere else, simply cycle lanes?

For me the distinction makes a lot of sense, because I haven’t ever thought of advisory lanes as true cycling lanes: You can ride your bike there, but it’s not the best solution. Kind of like walking along the shoulder of the road in the absence of a proper sidewalk or separate footway. It is legal, but it can be dangerous and I wouldn’t be happy if I got routed there by a navigation app.

These lines indicate that you are free to change your lane when you are traveling in the same direction. It doesn’t mean giving way to pedestrians.